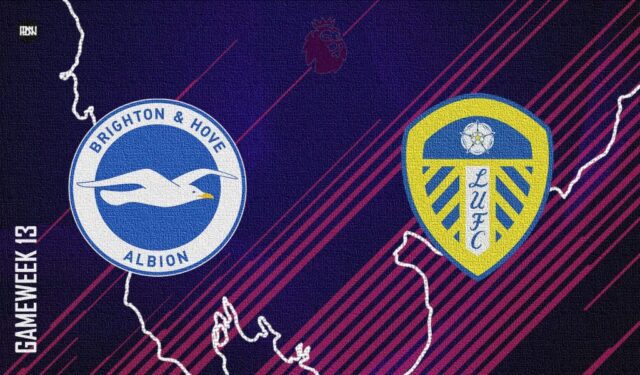 Premier League gameweek 13 is going to be interesting for both Leeds United and Brighton & Hove Albion as both of them are struggling to achieve their targets. Brighton is currently at 9th position in the table and would want to keep its position in the top ten while Leeds are currently 17th and are fighting to stay out of the relegation zone. In the head-to-head battle between the two teams Brighton have a clear edge as it has won both the games played between them, still predicting a winner would be very difficult but we’re definitely up for an exciting encounter.

Bielsa would again have the same squad that he had against Tottenham Hotspur. The manager also confirmed star player and Ayling won’t be in the squad but is recovering well by stating in a press conference, “Luke Ayling is healthy, it’s likely he will play with the Under 23s on Monday [against Manchester City], as a further step to his total recovery.” The return date for Patrick Bamford still is unknown as the manager stated, “The only two players in the period of their final recovery are Robin Koch and Patrick Bamford.”

Good news for Brighton fans as manager Graham Potter has confirmed, “Enock’s [Mwepu] recovered well and trained this week. We need to see how he is but he’s got a really good chance of being in the squad. Steven [Alzate] and Danny [Welbeck] are making really good progress.” Big relief for Brighton as star goalkeeper Robert Sanchez is back after his suspension, the manager reacted to that as well by saying, “We believe in Rob [Sanchez] a lot, we know his quality but we also know Jason’s [Steele] quality. We’re very lucky. Rob reacted well (to the red card) – he was disappointed with the result but we’re all behind him and he’ll come back stronger for it.”

Leeds have been in decent form despite the recent loss 2-1 loss against Tottenham Hotspur and had registered a win against Norwich City and a draw against Leicester City before the international break. Even in the game against Tottenham, they dominated the whole game with 57% possession, more shots on target, more passes completed, and better passing accuracy. They performed much better than Spurs but failed to score goals which led to the loss. Bielsa would look to break Brighton’s unbeaten run against Leeds by beating them at their home stadium.

Brighton on the other hand have been equally good despite the 2-0 loss to Aston Villa. They dominated the game with a staggering 63% possession and completed 608 passes while Aston Villa completed a mere 352 passes. It is their home game and would want to make a positive impact with a dominating win. Brighton are the favorites with a clean record against Leeds and with the possible return of players like Mwepu and Sanchez.

Despite missing the last game against Spurs due to illness, the Brazilian winger Raphinha has been in scintillating form. He has stepped up in the absence of No. 9 Patrick Bamford. He is this season’s top scorer for Leeds United and has scored 5 goals in 10 matches, the majority of the goals coming from outside the penalty area. He scored the equalizing goal in the last match that he played against Leicester City. The Brazilian has been one of the best wingers in goals and assists per 90 minutes. He has been a part of a select group of wingers who are above the league averages for both goals and assist per 90 minutes. He provides great support through his tactical runs and long-range ability and would be the ‘danger man’ for Leeds against Brighton.

The 2021-22 season for Shane Duffy has been pretty good by his exceptional defending performance. His stats speak for the same with a 73% tackle success rate, having won 44 aerial duels and clearing the ball 54 times the highest in his team. He has played a pivotal role in the four clean sheets that Brighton have had during the season and has even scored a goal proving to be a man to mark during corners. He holds the defense together and will play a crucial role against Leeds talisman Raphinha and winger Daniel James. With the all-around performance he brings on the pitch every time, he’ll definitely be one player to look out for.