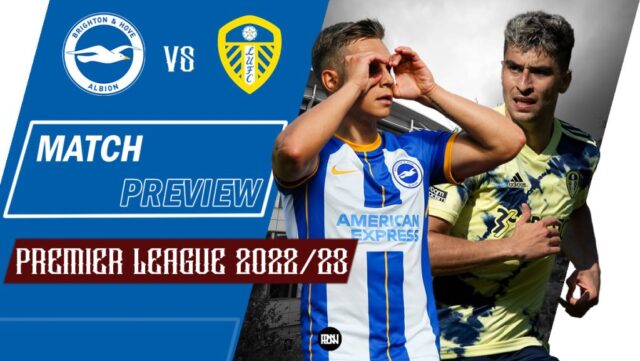 Two teams who did not grab much attention before the start of the season are indeed grabbing all the lights after great starts to their season. Dishing two wins and a draw in their opening three fixtures, Brighton & Hove Albion & Leeds United have been almost flawless. Both teams now lock horns against each other at the weekend after securing wins in their opening round of the EFL Cup this midweek.

It will not be wrong to call both teams giant killers after the recent performances. Leeds will enter the match with full confidence after getting the better of Chelsea in a very fashionable manner, while Brighton under Potter just looks better as each game passes.

Early into the season, both teams would not be much worried about their squad. Brighton still looks in a better state as Potter has trusted the same XI in the first three Premier League games and rested all of them in the midweek game. Moder remains the only absentee for the Seagulls, with the player undergoing long-term treatment.

Jesse Marsch started the season knowing he would be without Firpo, Ayling, Bamford and Dallas. But Bamford, as quoted by the manager, looks close to making a comeback soon. The forward might find a place on the bench this weekend.

Brighton started the season strong with a statement win against Manchester United, and a straight-forward victory against London giants West Ham last weekend just proves that Potter and his men are ready for a challenge this season. Despite losing to Cucurella and Bissouma, the team looks ready to face all challenges and sits 5th in the league. Potter has assembled the squad well and has trusted the same 11 players in all the three opening Premier League fixtures. The players have delivered as per the manager’s expectations, but the bench also showed strength as they got the better of Forest Green in the midweek. Also, Estupinan must be eagerly waiting for a start in the Premier League after making a high-profile shift to the English league.

Leeds definitely was the team grabbing all attention last week as they got 3 past their rivals, Chelsea. The energy of the players was just unmatched for the whole 90 minutes as they were just causing havoc in Chelsea’s midfield. Marsch’s pres-season work was very much visible as the players played together as a team and looked very convincing on and off the ball. The new players joining the group have very well filled the holes created by the high-profile departures of Raphinha and Kalvin Philips. Leeds very well was outnumbering Chelsea and also bettered the energy in every zone of the pitch. Jesse Marsch will be hoping the same intensity over the whole season by his players and performance close to the last game will be enough to trouble the Seagulls.

One must expect a high-scoring thriller with very little to separate the two teams.

Aaronson, in the game against Chelsea, just announced his arrival in style, scoring the very first goal of the match after pressurising Mendy to make a mistake. The young American just was all over social media as his intensity and vision were praised very well by the whole fan base. Aaronson moved from Salzburg this summer in a move that was very much expected to be a Marsch’s signing. The attacking player was pretty impressive in Austria in the few appearances he made. He helped Salzburg win the Austrian Bundesliga in the previous season after nearing 10 goal contributions. Aaronson has been termed as “Medford Messi” by his fans, and the American will get a lot of opportunities to hold on to the title in the league.

The transfer of Yves Bissouma to Spurs made a perception that Brighton will miss a lot in the midfield but the young Ecuadorian just did not make anyone feel the same. Caicedo, just 20, has given performances similar to that of some experienced midfielders. His heroics has caught the eyes of many, and especially the Reds of Liverpool as they hope to make a swoop for the midfielder. The Reds hope to have him as their ideal no. 8 in the Klopp System after Thiago termed injured. The midfielder is well praised for his long shots and concentration in the game, and to get the better of high-pressing Leeds, his role will be crucial to grind a result.