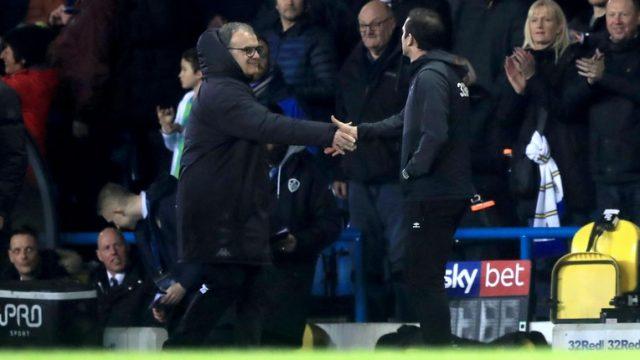 Leeds United are set to face Chelsea at Stamford Bridge with 2000 blue supporters ready to enter the stadium as a ray of light after these dark times.

The last time Leeds played Chelsea, the match ended in a defeat for the Whites in 2004 at Stamford Bridge. So therefore this time with a change in management and a better form so far in the league, Leeds will make sure to challenge this season’s title favourites Chelsea in a fierce battle.

When Bielsa was asked to analyse his team’s performance after ten games in his pre-match press, he said, “I’m always a little reluctant to answer this question. If you observe, we had a favourable start to the season where the goals that we conceded didn’t really affect the result as we were scoring plenty.”

The last time Lampard and Bielsa met each-other was in the Championship when the viral “SPYGATE“ news of Marcelo Bielsa sending a spy to Derby County’s training ground had got the Leeds boss in trouble. Although that was a long time ago and this time there will only be the 3 points to play for and not any controversies.

Speaking about Frank Lampard and Chelsea, Marcelo Bielsa said, “During last season he developed a lot of the players that were already in the institution and this season he improved the composition of his team, choosing players for the positions he deemed he needed.”

The Leeds manager gave team updates during his press conference where he confirmed that Diego Llorente is fit but he will be playing with the U23s to regain match fitness. He also said that veteran magician Pablo Hernandez will also play with U23s to get game time before playing for the first team.

Chelsea currently sit 3rd with Liverpool and Tottenham above them and Leeds are below Manchester City in 12th position with only a point difference separating them.

Since losing to Liverpool in MATCHDAY 2, Chelsea have not lost a game, while Leeds have lost 4 matches and won 4 matches the same number as Newcastle United.

While, Patrick Bamford has a point to prove against his former side where he spent 5 years in the fiddles before joining Middlesbrough.

The match kicks off at 8.00pm (BST) at Stamford Bridge.