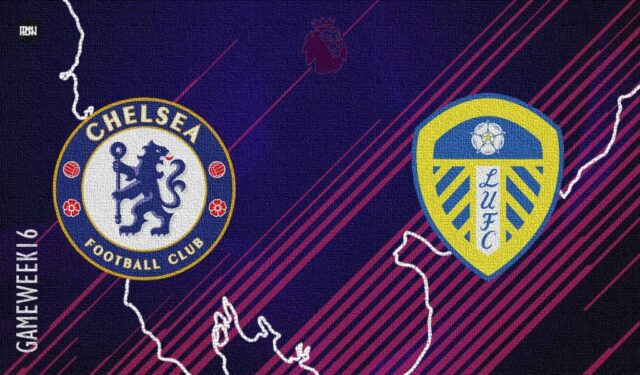 Chelsea will welcome Leeds United to Stamford Bridge in this weekend’s Premier League fixture. The new chapter of what is shaping up to be an enticing race for the title with Liverpool and Manchester City beckons, as the Blues look to bounce back after a bad result last week.

Thomas Tuchel’s men had an impressive start to the season, but an injury crisis has meant that their intensity has fizzled out a bit in the last couple of matches. While the West London outfit threw away a half time lead to lose away to West Ham as Manchester City dethroned them to go top, their mid-week Champions League outing also ended up being a night of similar frustration.

The defending champions saw their late lead against Zenit wiped out in stoppage time to end the match in a draw, as they conceded top spot in their group to Juventus. Chelsea will have to turn their fortunes around quickly if they do not want to fall off the pace, as the games coming in thick and fast during the festive period will likely have an impact when the fat lady sings in May.

While the Blues have dropped to third on the table with 33 points, their opponents Leeds United have not had a particularly bright start to their season and currently sit 15th on the table. Marcelo Bielsa’s team this season have been accused of dropping off a notch from the infamous pressing machine that surprised a fair few teams last season, and have accumulated only 16 points so far.

With only three wins in 15 games so far this season, Leeds United are sitting only six points above the relegation spots: the Elland Road faithful will want a revival in form to stay clear of the drop zone. The East Yorkshire outfit will be hoping to build on from a couple of recent positive results: their narrow home win against Crystal Palace at Elland Road two weeks ago was followed by Patrick Bamford’s late equalizer against Brentford earning a point last weekend.

Bielsa’s men have now gone seven matches without a loss, though their last league defeat did come away against a London outfit in Tottenham Hotspur. While the two teams boast of a historical rivalry between each other, recent history favours the home side. Leeds have only won one of their last 10 meetings with the Blues, which came back in the 2002/03 Premier League season: and Chelsea will be confident after this fixture last season ended in a 3-1 win for them.

The onset of December has meant that the hosts find themselves in the middle of an injury crisis, and will continue to miss a list of regulars for this weekend. Thomas Tuchel has confirmed that the Blues will miss Trevoh Chalobah and N’Golo Kanté in addition to Ben Chilwell through injury, while Mateo Kovacic tested positive for COVID-19 after returning to training this week.

As a result of Chelsea’s lack of midfield options, Tuchel mentioned that Jorginho will continue to “play through the pain” to be available for a start. Ruben Loftus-Cheek is likely to partner him, as he was not named in the list of injury concerns after missing the mid-week outing. Timo Werner is also likely to be rewarded with a start after getting two goals and an assist mid-week.

The visitors also have a plethora of fresh injury concerns ahead of this weekend, as Liam Cooper and Kalvin Phillips both suffered thigh injuries in the draw with Brentford. Patrick Bamford has now come down with a similar injury problem sustained in the same game, and Marcelo Bielsa’s available attacking options have taken another hit with Rodrigo being ruled out for heel pain.

While Robin Koch will miss the game through illness, Pascal Struijk should shake off hip pain to return to the fold. Tyler Roberts – who is one booking away from a one-match suspension alongside their talisman Raphinha is likely to lead the line the absence of Bamford and Rodrigo, while Phillips’ spot in the heart of midfield will be most likely be filled by Mateusz Klich.

On paper, this fixture nods towards a resounding home win for the Blues considering that the visitors have only picked up one win on the road all season. But it needs to be taken into context that Chelsea have drawn both of their last two league outings at home against Burnley and Manchester United. Chelsea have not drawn three consecutive league games at home since the days of Guus Hiddink, and will also be hoping to ditch their recent trend of letting leads slip.

Tuchel was ready to point out the fact that his team have struggled to hold onto leads in the past few games, as Chelsea let go of their lead a total of four times in what has been a difficult week. Leeds United will be looking to exploit this moment of weakness to cause any sort of trouble to the European champions, whose brilliant defensive form has also been dealt a blow by conceding six goals in the past week. However, Leeds have defensive problems of their own, as only Norwich, Newcastle United and Watford have conceded more goals than them this season (22).

Their list of fresh injury concerns ahead of this season puts Leeds on the backfoot, and the big guns returning at the back for Chelsea only spells danger for the away side. The Blues will be keen on cutting down the deficit between themselves and the league leaders, and will be hoping to better their recent form and break a streak of two winless games with an inspired performance.

The Blues’ record signing will be key in determining their fortunes this weekend. The Belgian forward did not particularly hit the ground running after his €115m summer move from Inter Milan, and an ankle issue kept him out for a run of games: but Lukaku has returned to the fold just in time ahead of the stacked festive schedule. The 28-year-old will be hoping to justify the Blues’ faith in him by firing on all cylinders as soon as possible, and will hope to build on from his goal against Zenit St Petersburg in the mid-week outing. Lukaku will likely lead the line alongside Timo Werner just as he was in mid-week, and he will hope to score his first Premier League goal since Chelsea’s home outing against Aston Villa in September.

Leeds United will depend on their brilliant Brazilian in order to get anything out of the game. Raphinha has been the brightest spark of Leeds’ season so far, and leads the scoring charts for his team with six league goals this season. The chief creative influence for his side, Raphinha has made 27 key passes and created 28 chances for Leeds so far this season: and will be key in unlocking the Chelsea defense which has looked a little troubled of late. Raphinha will hope to feed Tyler Roberts in behind the Blues’ rear guard whenever he can, and the Brazilian will also look to make the most out of set-piece opportunities to trouble the opponents further.