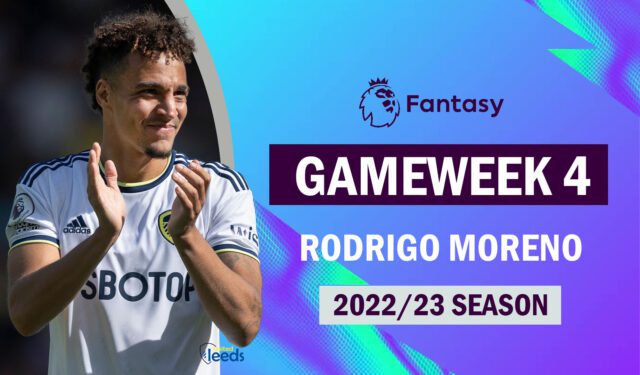 After a relegation scrap last season, Leeds United have started this campaign brightly. Jesse Marsch’s men have made progress despite losing Raphinha and Kalvin Phillips, two of their important players. The cohesion between the players appears to be very strong, and the newcomers have undoubtedly adapted more quickly than was anticipated.

One man, however, has taken it upon himself and stepped up to the task. Signed from Valencia back in 2020, Rodrigo Moreno failed to hit the ground running in his first two seasons. But the Spaniard is thriving from the newfound responsibility and is leading Leeds United’s line in Patrick Bamford’s absence. So, he has undoubtedly become an important FPL asset in the first few games, and here is why you should get your hands on Rodrigo in Fantasy Premier League now!

Coined as a midfielder in the Fantasy Premier League, Rodrigo has started the season as a number 9. He has already increased in value and is now worth 6.3 million. For any player who is classified as a midfielder but is played as a striker, let alone given his form, this is undoubtedly a great bargain. And with the addition of Aaronson to Leeds’ squad, the creative department also seems to click for Marsch.

Rodrigo’s numbers speak for themselves – 4 goals, and 1 assist in just 3 games is remarkable for starters. Furthermore, he has the 5th highest xG among all the players this season so far (2.26) – with only the likes of Haaland, Mitrovic, Nunez, and Zaha ahead of him. It’s important to remember that, except for Nunez, every single one of these players has taken a penalty this year, which increases their xG. So, Rodrigo has been receiving quality service in this side and is on the end of the chances from open play.

The former Valencia player is also only behind Kevin De Bruyne in terms of xA (1.34). This further raises his stake and is one reason why he is currently the most transferred in player ahead of GW4. Additionally, he has taken 13 shots and made 4 key passes in just 3 games. Well, Rodrigo has certainly carried his pre-season form (5 goals in 5 games, including a hat-trick vs Cagliari) to the main stage.

Promising positions in and around the box

Rodrigo seemed to have found a new lease on life under Jesse Marsch. Previously played in behind the striker or even on the wing, he has risen to the occasion as a center-forward. The American manager has also given him the freedom to drop deeper when required to aid the buildup, and this suits his play.

With that being said, the poacher’s instinct he showed at Valencia, especially during the 2017-18 season, is well and truly back this campaign. Against Southampton, he made a typical number 9 movement in the box, which deceived both of the center halves; he tapped it in from the near post, giving the goalkeeper no chance.

Set pieces are another department that Leeds have worked on by the looks of it. And with Harrison’s incredible deliveries, we can expect Rodrigo, who is making the near post runs, to either score the goal himself or flick it to the box for an assist. This near-post flick happened in games against Chelsea and Southampton.

However, with Luis Sinisterra’s arrival and Patrick Bamford’s return from injury, there is a question about Rodrigo’s minutes. But he is unquestionably in form and his confidence is at an all-time high, so it will be difficult for Marsch to either drop him or substitute him early. The next 5 fixtures also serve as a reminder of why the Leeds man is a top transfer target in FPL this week. They play Brighton & Hove Albion, Everton, Brentford, Nottingham Forest, and Manchester United. Hence, Rodrigo could prove to be an excellent purchase at a bargain and for the long term as well.