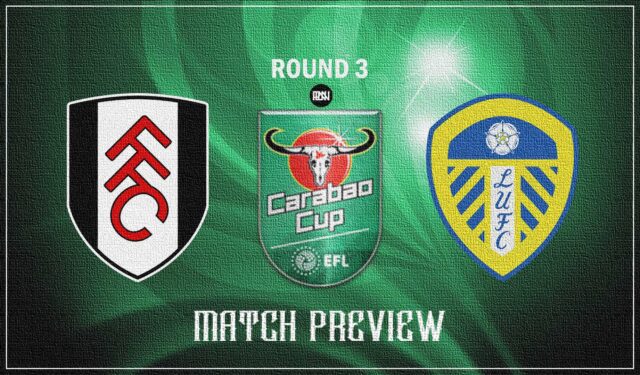 The Carabao Cup returns this week, and Fulham will meet Leeds United in Tuesday’s fixture in the third round. The contest will feature two sides in contrasting form against each other as they try and progress to the next round of the cup competition. While Premier League outfit Leeds United are not in the best of touch having won only one of their last five matches, Fulham, who were a top-flight team as recently as last season have been one of the better sides in the Championship this season.

Fulham are currently sitting second on the Championship table having won 16 points from their eight matches so far, and have won three out of their last five games – even though their last outing finished in a 1-2 loss to Reading. Marco Silva has had a good start to life in West London, as Fulham have scored the most goals in the second tier of English football so far this season (18) – and have also conceded the second least amount of goals by any team (7). The latest recruits in the middle of the park in Harry Wilson and Nathaniel Chalobah, as well as forward Rodrigo Muniz, have gelled well into the team after securing summer transfers to the club, and they will look to keep up their form.

On the other hand, Leeds United have not had the best of starts to the new Premier League season. The East Yorkshire outfit are languishing at 17th position on the league standings, having racked up only three points from their five league games so far. Leeds have continued to struggle defensively as they have the third-worst defensive record in the league so far – Marcelo Bielsa’s team have shipped twelve goals so far this season, and only Newcastle and Norwich have conceded more. Usually known for their ability to outscore their opponents, Leeds also finds themselves in a bit of a drought for goals – having only managed to score five goals in the league this season.

Fulham will be without Kenny Tete, Terrence Kongolo, and Tom Cairney through injuries, while Harrison Reed is also a doubt for the game having picked up an injury last week.

As for Leeds United, Diego Llorente and Robin Koch are both ruled out of the match while the recovering Adam Forshaw and Luke Ayling – who picked up a knock against Newcastle – are also doubts. Pascal Struijk is suspended, serving his domestic ban for being sent off against Liverpool.

Both teams are expected to rest a fair few regulars for the match, but Leeds will hope that their quality shines through to get them a result away from home. But for that to happen, the midfield battle will need to be won – making it a very important game for the likes of Leeds’ midfielders to dominate Fulham’s midfield. Nathaniel Chalobah and Josh Onomah have been in good touch leading up to the game, and neutralizing them will be Leeds’ key to winning this game.

As for Fulham, they will look to capitalise on a makeshift Leeds defence. In the absence of talisman Aleksandr Mitrovic who is likely to start on the bench, Harry Wilson will look to come up with the goods in front of goal – as will Rodrigo Muniz who scored at the weekend in their defeat against Reading.

The young Welsh playmaker will be key for Fulham to find the breakthrough against an established top flight side. Wilson completed a permanent transfer to Fulham from boyhood club Liverpool in the summer, and he has had a good start to life in west London – racking up three goals and two assists in four appearances in the Championship this season.

In order to not let Leeds’ defensive issues get the better of them, Kalvin Phillips will need to have a brilliant game. The English midfielder who had a brilliant campaign in the summer’s European Championship, will look to bring his international experience into the fray as Marcelo Bielsa’s team will want to steer off a potential Cup upset. He could possibly be starting further back in the defensive line owing to Leeds’ injury concerns at the heart of the defence.