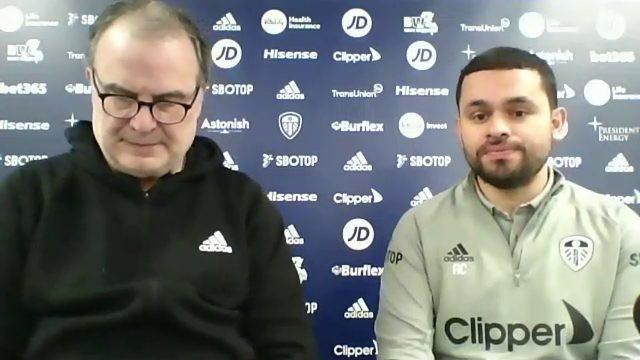 On Boxing Day, Leeds United will face Burnley at Ellan Road after a brutal loss to Manchester United at Old Trafford. Robert James will be the referee in charge of the game. The game will kick off at 12:00, BST.

Leeds will have to bounce back after their last away game loss at Old Trafford. They’ve had a lot of time to reflect upon their strategies and most importantly a huge break before the busy back-to-back fixtures.

In Leeds United’s Pre-Match Conference, the Leeds boss Marcelo Bielsa confirmed about the injuries that his side suffered, he said that Liam Cooper will be out for a while and Diego Llorente will be available for selection. All the other players are fit for selection.

Marcelo Bielsa will look to get his players focus back, as they face Burnley and West Bromwich Albion in the span of 4 days.

Burnley who like to sit deep and attack from set pieces will try to breach the Leeds defence. The likes of Ashley Barnes, Chris Wood and Dwight McNiel will definitely be a major goal threat to Leeds with their creativity and goal scoring qualities.

Charlie Taylor, who is Burnley’s left back is a really good asset who has attacking and defending prowess to showcase against Leeds. Charlie Taylor will be facing his former side with whom he spent around 12-13 years. Nick Pope in goal will definitely test Bamford’s ruthlessness in front of goal as the Claret goalkeeper was their best player last season therefore the Leeds attackers will have to keep their composure in front of goal against Burnley.

Leeds will definitely have to improve on their set pieces as they conceded another goal of a corner against Manchester United with Lindelof not being marked to tap into the goal. They will also need to cancel out all the space in midfield when they’re defending.

During a Leeds counter attack if they loose possession in the midfield it leaves wide spaces for the opponents to counter attack Leeds just as it happened against Manchester United where they were left exposed during the third goal. Although Marcelo Bielsa shouldn’t have to change his tactics, because the team is doing really well by pressing higher and attacking but they will need to adapt and improve their game by making better decisions during the game as the league is getting even more tougher.

How could Leeds United respond?

Leeds will play their usual attacking style of football with full press forward from all the flanks which will force their opponents to make mistakes at the back and score on the counter. Leeds will try and breach the defensive style of play of the Clarets who play out from the back usually to create a chance for their attackers. Leeds will definitely go all in against Burnley because a win in their next 2 games will take them in the top half of the table (above 11th position). The lineup could be just the same with only Diego Llorente coming in place of Liam Cooper who is injured. Pablo Hernández will look to play a part in this game using his creative abilities coming off the bench.

Burnley have managed to get 8 points out of their last 4 games to lift them out of the relegation zone.