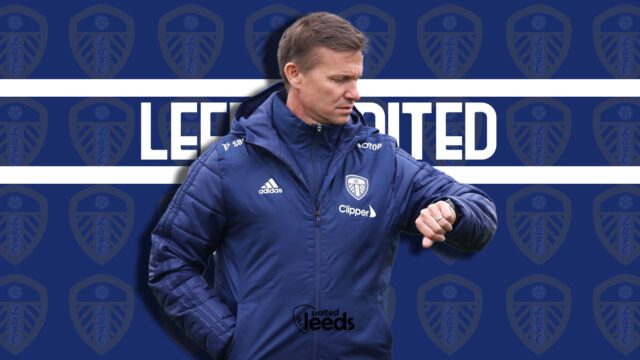 The departure of footballing genius Marcelo Bielsa in February earlier this year was a seismic change carried out by Leeds United. The club announcement of Bielsa’s dismissal explained how “[Bielsa] changed the culture of the club and brought a winning mentality to us all”, as well as being able to “create a legacy”, which is by no means an exaggeration to the Argentine’s contribution to Yorkshire club.

Bielsa’s incredible work of promoting Leeds to top-flight football for the first time since 2004 slowly became overshadowed by the club’s struggling form to retain themselves in the Premier League after only their second season since promotion. It is arguable as to whether the correct decision was taken into the removal of ‘El Loco’ from the hot seat, although considering the fact Leeds remains in the Premier League today, it might be unfair to criticise the conflicting decision to move ahead with another manager in charge.

The new boss? Leeds decided on wildcard manager, Jesse Marsch – just two months after mutually agreeing on a contract termination with the previous club, RB Leipzig, with only four months in charge of the German side. Prior to his underwhelming managerial career in the Bundesliga, Marsch came with reputable coaching notoriety from his work with Austrian powerhouses, RB Salzburg.

“I couldn’t have more respect for what Salzburg are doing here, the way they play football”

“Salzburg were unbelievably strong, especially in the first half but we were too… We should have scored more goals. Massive respect for Jesse and what they did”

Those were the words used by Liverpool manager, Jurgen Klopp, to praise RB Salzburg’s immaculate performance against his side in a Champions League group stage match back in 2019. Marsch’s team were able to comeback from 3-0 down at halftime to 3-3, before conceding to an unsurprising Mohamed Salah goal to unluckily lose the game. Despite failing to win the points in the tie, the match highlighted the spirit of what a Jesse Marsch side is; intense, aggressive, and most importantly, sedulous. Marsch’s matchup with a top European side delivered a fantastic platform for the American coach to showcase to the rest of the world just what he can build with the correct enthusiasm and mindset in his squad, especially to the majority of viewers who may not follow Austrian football to a tee – there is no doubt that Marsch knew this himself.

Jesse Marsch ended his RB Salzburg coaching stint as a two-time Austrian manager of the year, as well as winning the Austrian league twice as part of four trophies in his three-year spell at ‘Die Roten Bullen’. Shortly after the departure of German footballing mastermind Julian Nagelsmann at one of RB Salzburg’s ‘sister’ clubs, RB Leipzig, Jesse Marsch was hired as the man to spearhead the team forward in what had initially appeared to be a seamless transition of coaches and philosophies. Unfortunately, for both Marsch and RB Leipzig, it had ended in an anti-climactic way, with Marsch’s contract eventually being terminated and parting ways after only a handful of months in Germany.

Many football fans and even club officials themselves wonder why it didn’t work out for Jesse Marsch in Germany – ending his time in Leipzig with an underwhelming record of seven wins, four draws, and six losses. The argument of whether or not Marsch was able to coach in major European football was seriously brought into question; perhaps he may not be ‘good enough’ to manage a top team. On the other hand, it could always be the case of, although uncommon, a mismatch between club and coach. In fact, an exclusive interview conducted by Sport 1’s Doppelpass show revealed that Jesse Marsch had allegedly twice reported to RB Leipzig’s club bosses that the dynamic of both the club and him may not be the ‘correct fit’.

There are plenty of examples of top football managers across the world who have endured disappointing spells at certain clubs but for Jesse Marsch, his disappointing time in Leipzig feels like a serious ‘stain’ on his reputation and the rest of his managerial career as it still hovered the question of whether the American boss was able to handle top-flight European football.

It was a short break for Jesse Marsch after his underwhelming spell in Germany, with Leeds United knocking at the door for a replacement to footballing legend, Marcelo Bielsa. The myth of an American coach in the Premier League has been a long-standing ‘joke’ to fans in England and across the globe. Whilst a part of the stigma may have been caused by the pre-existing dislike of Americans by the owners within the league that have possibly prejudiced its way over to American coaches, it could also be due to the well-known record of Americans managing English sides in the past – Bob Bradley and David Wagner struggled in the league with their respective sides although the belief that this was because of their American identity is simply unjust and irreflective of the ability that Americans possess.

As infamously mentioned in Marsch’s first press conference as Leeds United manager when responding to facing potential stigma as an American coach, “I’m not sure Ted Lasso helped!”, quickly reflecting his humour and personality as not just a coach, but as a person with character. It wasn’t an easy time for Marsch to board what can only be described as a sinking ship at that time for Leeds, with the club struggling with the dreaded thought of relegation that was quickly becoming a reality for fans. Jesse Marsch found out the difficulty of the task ahead of him quickly, losing his first two games as manager and, before the final game of the season, was closing in on his first chapter as Leeds manager with a record of three draws, five losses and just three wins in eleven games. It was undoubtedly a difficult time for Marsch but it wasn’t until a last-minute winner in stoppage time by fan-favourite Jack Harrison in the final matchday of the season against Brentford that Leeds fans could finally exhale and prepare to undergo a transition into the Jesse Marsch era.

Jesse Marsch was able to keep his newly assigned Leeds team up in the Premier League in the end and it most certainly took blood, sweat and tears. Similarly, to successor Marcelo Bielsa, Marsch implemented a heavy pressing system that eventually took its toll on his players with consistent injury and fatigue issues. Jesse Marsch knew that he would not be able to completely renovate his Leeds team to the style of play he desired with his crop of players although many minor changes were made. For example, Marsch instructed the switch to a zonal marking system rather than a man-to-man tactic, as well as the addition of far more tactical fouls in the middle and final thirds of the pitch – ironically enough, Leeds appeared far worse defensively and paid the price of such forward-minded football. It was a learning curve for Jesse Marsch and his players as of course all coaches who haven’t managed in the Premier League before require significant time to adapt and implement their style. However, full credit must be given to Marsch and his players for maintaining the way that he wanted to see his players play. He told them to run for their lives; they ran for their lives. In the end, the belief in his system and the desire he shown had motivated his players to try to perfect the system as much as possible – eventually keeping them in the league.

As for this season, Marsch has been able to get to far greater grips with the team that he aims to build. With new signings such as Brenden Aaronson, Luis Sinisterra, Tyler Adams etc. all looking promising players under Marsch, it looks like the American might finally be able to mould his team into the way that he dreams of playing. Typically opting for a 4-2-3-1 formation this season, Marsch maintains his heavy pressing style with a strong emphasis on wide players joining the attack to overload the opponent’s box after winning the ball back through relentless counter-pressing football. His fullbacks often fly forward to add width to the team and with his central midfielders dropping into deeper spaces in certain areas of the pitch depending on which side of the pitch the ball is on; Leeds looks far stronger defensively too. The manager that showed incredible intensity and belief in his system with the group of players before in Salzburg looks to have finally stamped his authority in Europe and Leeds fans should be excited about the future.

Leeds United have started the season positively, currently sitting 9th in the league and managing a notable win against Chelsea early on. At the time of writing, Leeds had started the season with three games undefeated to now with three games without a win. This is a perfect example of Jesse Marsch and his style of football, a rollercoaster. Leeds fans will have incredible highs in the season but also have significant lows but one thing for sure is that once Jesse Marsch can fully grab a hold of the steering wheel, Leeds will only improve season on season and play some incredible football.