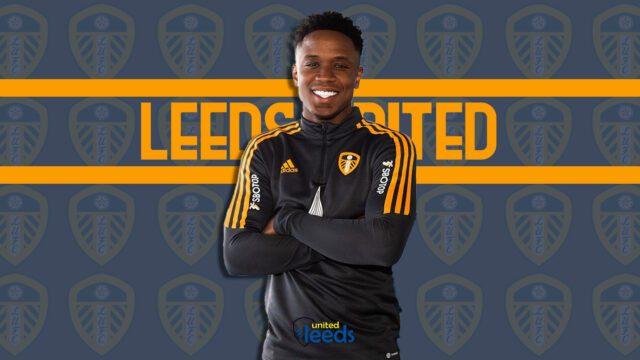 As Leeds United announce the signing of Luis Sinisterra from Feyenoord, the Columbian Winger is already being hyped up to replicate what Luis Diaz is doing for Liverpool.

It might seem a lot to ask at first, but nothing is impossible when we talk about Football. Meanwhile, it’s a justifiable joyous moment for the Peacocks as they might have found the perfect man to replace Raphinha in the long run- who appears to be on his way out, in what looks like in the near future.

Luis Sinisterra has been unveiled at the Elland Road, and it is being believed that the Yorkshire-based club have paid a sum in the region of around £21m plus add-ons. Having said that, it looks a very flashy deal to be fair. Sinisterra’s past performances have been the best example of that; in other words, he has that perfect Columbian flare in him- the pace, trickery to get away from his marker and the eye for scoring and assisting goals.

He scored 23 goals and provided 14 assists, in a total of 49 appearances that he made for Feyenoord in the last season. Taking his side to the final of the inaugural UEFA Europa Conference League and helping them to finish the Eredivisie in 3rd place.

Like his Columbian compatriot Luis Diaz, Sinisterra as well started his career playing for the local side- Once Caldas. He was just 15 when he was playing for the U20 Onca Caldas, and then at the age of 17, he moved to the first team. Sinisterra showed a lot of promise, so much so that he attracted scouts from all around the globe. But it was not until 2018, that he got to play in Europe when Feyenoord bought him for a mere sum of around £1m.

Since then, he has not looked back to where he came for – although, respecting it every day! At Feyenoord, he literally revolutionised the wing play, overthrowing the challenges from his teammates for a place in the squad and then staying put. The matter of fact is that he just played 11 games for the U21 side before he was moved to the senior squad- he scored 6 goals.

Till date, he has a G/A of 64 goals in just 113 appearances that he has made for Feyenoord in all the competitions.  And it is outrageous, considering he is an out-n-out winger! And now here he is, in one of the Elite Leagues in World Football- the Premier League. It is more than safe to say that Leeds United are setting standards with such signings.

Can he bring a “Diaz-esque” difference in the Leeds squad?

It is a lot of pressure, straight up, as he is already being compared to one of the best winter signings. But I would say the comparisons are rightly so, because of how both the players play. Sinisterra’s whole gameplay is typical of how Diaz has so far shown in the Premier League and even at the International Level. Both are Left Wingers, who can play as a second wind to the strikers, and they both show flare and trickery in abundance whence going forward.

A good Raphinha replacement, then? In the current market, at that price value, yes! Sinisterra is one of the best out there, currently, to come close to what Raphinha was able to do at Leeds. But at the end of the day, it all comes down to how Jesse Marsch might lineup the squad. Will it be a modern 4-3-3 formation, that we might see from the Whites in the next season? Or will they stick to how they have been playing? I mean these are certain questions that need to be answered before the season begin in less than a month’s time.

However, at the moment Luis Sinisterra looks like a good signing on paper! And as far as Leeds’ transfer market is concerned, this will be their 6th signing after buying Branden Aaronson, Rasmus Kristensen, Marc Roca, Darko Gyabi, and the recent most before the Columbian – Tyler Adams. It is a positive sign that they are making big moves, and who knows we might see them challenging for one of the 7 European spots next season!