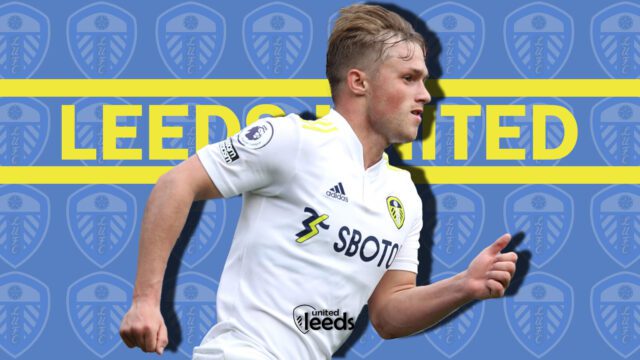 Leeds United are closing in on keeping youngster Joe Gelhardt at the club on a long-term deal. The Englishman’s current contract is set to expire in the summer of 2024 and Jesse Marsch feels the 20-year-old is crucial to his plans at Leeds and wants the player to extend his stay at Elland Road.

The recently concluded season was the breakthrough year for Gelhardt in the first team making 20 appearances for his side. Gelhardt contributed 2 goals and 4 assists of which the goal in stoppage time against Norwich City secured 3 vital points for the Peacocks ensuring they stayed in the top flight for another season.

Despite his appearances in the first team being limited, Gelhardt was in blistering form in Premier League 2 for Leeds. The striker scored 7 goals in 10 appearances including two against Liverpool, the team he grew up supporting, being his best performance.

Jesse Marsch has publicly praised the youngster on numerous occasions citing his importance to the long-term project of the club and his plans at Elland Road. The American said, “Certainly with me and with us in this process, we have to get him going more and more and more. So certainly he will play a much bigger role now going forward.

“He has to play, you know, young players have to play in order to improve and he has the quality to do so. So I’m not so concerned about it. I believe in him entirely. And I know he’s going to get better and better.”

Patience could be the key for Gelhardt who would want to be a regular starter next season. The extension of Joe Gelhardt certainly sends a positive message to the fans who love when an academy product gets the nod to start for the club and play regularly. The Jesse Marsch era could bring more similar contract extensions of the Thorpe Arch’s brightest talent with the American focused on building a Leeds side with the perfect blend of experience and youth.

READ MORE: Should Leeds United be looking to bring Ezgjan Alioski back?