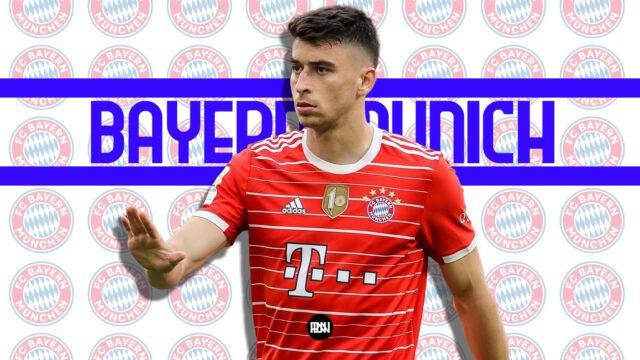 Bayern Munich midfielder Marc Roca is on the verge of an exit and set to join Leeds United this summer.

This came after Manchester City are plotting a move for Kalvin Phillips from Leeds and the Elland Road club will be in need of a midfielder ahead of the next season. Leeds manager Jesse Marsch is under the impression that Phillips may very well leave the club this summer and the gaffer will need to look for reinforcements in the position.

The 25-year-old Bundesliga star is a defensive midfielder who can adapt to playing box-to-box and is capable of putting out fires at the back and driving the team forward. The left-footed playmaker appears to be a promising prospect for Marsch’s side for the next season considering the club is in need of a holding midfielder.

However, the player has only appeared for Bayern in only 13 matches across all competitions which included coming off from the bench four times in the Champions League. While the player has not been as impactful with Bayern but with his best years still ahead of him, he could hone his skills under the Leeds gaffer and prove to be vital for the side.

The Spaniard has also received offers from La Liga clubs but he is keen to make a move to the Elland Road this summer. With the reinforcements in the midfield seeming to be the agenda set by the manager, Leeds are in full swing to make new signings to bring more depth.

The club’s director of football, Victor Orta has already completed deals for Brenden Aaronson and Rasmus Kristensen and is plotting a move to complete the signing of Marc Roca as swiftly as possible. The Whites are hopeful of agreeing on a new contract with Phillips, but the player’s fate remains to be seen for the next season.

With Takumi Minamino also closing in on a potential exit from Liverpool, he could team up with Roca and Aaronson in the midfield under Marsch. Minamino could possibly take up the right-wing position which he has primarily played at Liverpool and Aaronson would play as the central attacking midfielder, as he has done in Salzburg’s 4-4-2 formation. Roca will be seen in the defensive midfield position to provide the through-ball passes and make crucial interceptions in the crunch moments.

Assuming Phillips moves on from the Elland Road club, Marsch could very well be forced to make attempts to sign Roca and fill the position. However, with Phillips’ exit, the arrival of Roca to Elland Road would potentially be easier considering the player has already shown his interest to join the PL side.

Given his struggles at Bayern, the midfielder is unlikely to cost a fortune for Leeds to make a swoop for him. Leeds, who appear to be very active on the market could swiftly make a move for Roca and bolster their midfield.

It is only a matter of time before the two clubs reach an agreement for the Spaniard and the midfielder to don the white jersey for the next season under Marsch.

– Jesse Marsch joins San Francisco 49ers minicamp in the States
– Why are Leeds United keen to sign 18-year-old Sonny Perkins
– Rasmus Kristensen: What will he bring to Leeds United?