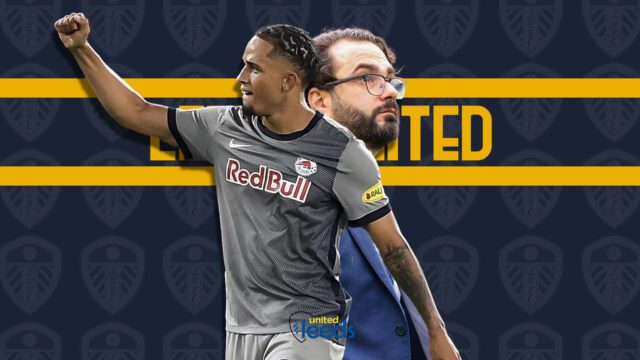 The transfer market is a place wherein multiple clubs express interest in a player and fight tooth and nail to get the deal over the line and get their man. This was the case this summer as Leeds United locked horns with Italian giants AC Milan for the signing of highly rated forward Charles De Ketelaere as the English clubs were in advance negotiations with the player and the club until the mighty Rossoneri hijacked the deal and managed to get the deal done. The two clubs could yet again go head to head once again as RB Salzburg’s Noah Okafor is the next hottest property coming out of the Austrian club’s talent factory.

Salzburg has been home to plenty of young talents who have been poached by big clubs around the world including the likes of Erling Haaland, Naby Keita, and Timo Werner to name a few and Okafor looks like the player to be next in line to get a move abroad to a bigger club.

According to Italian news outlet CalcioMercato, AC Milan will face stiff competition from Leeds United for the signing of Okafor as both clubs look to bolster their attack.

Noah Okafor – Rise to the top

The Swiss international moved to FC Basel in 2009 and moved up the youth system signing his first professional contract for the Swiss side on 31 January 2018. His debut came 4 months later against FC Luzern in the Swiss league as Okafor was brought on as a substitute. The 22-year-old kept impressing for FC Basel for the next 1 and a half years until RB Salzburg came calling in 2020 and the midfielder moved to Austria with a deadline transfer in the January transfer window.

Since then, Okafor has made 90 appearances for the Austrian side netting 30 goals and lifting the Austrian Bundesliga consecutively for the last 3 years. He wrote his name in the history books as he scored the vital goal in Salzburg’s game against Sevilla in the group stages last season helping his side become the first-ever Austrian club to qualify for the knockout phase of the Champions League.

Will Leeds United be able to out-muscle AC Milan this time?

The De Ketelaere transfer saga was a blow to Leeds as the Peacocks missed out on signing the Belgian wonder kid by a whisker. The signing of Okafor will boil down to which club presents a better sporting project for the 22-year-old’s development over the next years. AC Milan have adopted a youth-driven transfer recruitment policy in recent years with the Italians focusing on signing young players with world-class potential and developing them. The signings of Fikayo Tomori, Sandro Tonali, Pierre Kalulu and Brahim Diaz have been the foundation of the squad helping them win the Scudetto last year under Stefano Pioli.

Leeds United have also adopted a similar recruitment policy and the appointment of Jesse Marsch who has a reputation of developing young players throughout his managerial career also supports the club’s long-term vision of making the youth a key part of their first team setup. The summer signings which Marsch made included the likes of Tyler Adams, Marc Roca and Luis Sinisterra who are set to be the stars of the future for the Peacocks.

Okafor will have the final say on which club he prefers to join keeping in mind his development. The Jesse Marsch-Tyler Adams-RB Salzburg connection could swing his decision in Leeds’ favour as the American has been the Swiss midfielder’s coach and Adams was his colleague during their time in Austria. The transfer fee Salzburg will demand also remains unclear and could be a deal breaker if Milan and Leeds find the price tag expensive. It will be yet another transfer saga to keep an eye out for as similar foes go head to head in a David-Goliath fight given the size of the two footballing clubs as Leeds have the upper hand in this deal.