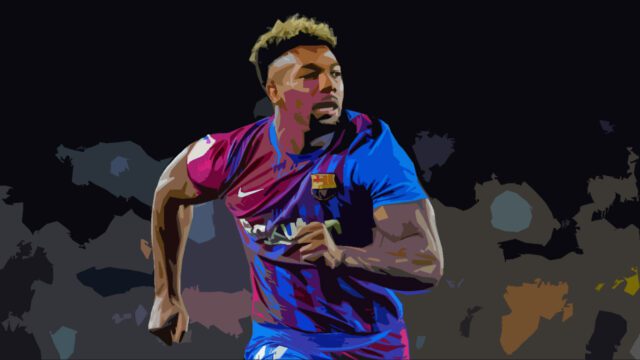 According to TEAMtalk, Victor Orta, the Director of Football at Leeds United, and his Elland Road transfer staff have made contact with the Adama Traore about a switch to Elland Road at the end of the current season.

The winger, who is presently on loan at Barcelona, is expected to return to Molineux this summer after it was reported that the La Liga club does not want to exercise their €30 million (£25.5 million) option to acquire the 26-year-old.

According to the report, Tottenham Hotspur are set to battle the Peacocks in the race to sign the Spaniard. The North London club were seriously interested in signing Adama but they saw their 25 million euro bid rejected by Wolves. When boyhood club FC Barcelona came calling, the winger chose to go abroad resulting in Spurs loaning in Dejan Kulusevski from Juventus.

With Barcelona highly touted with a summer transfer for Raphinha, the fact that Orta is now said to be in negotiations with Traore about a move to Elland Road might be viewed as Leeds are preparing for life after the Brazil international.

While Traore’s end product occasionally leaves a lot to be desired for a player in his position, the 26-year-old’s ability to advance the ball appears to make him a fantastic prospective addition for the Peacocks. He might be a very good like-for-like replacement for Raphinha with the pair having similar individual qualities.

Will Adama Traore be the right man to replace Raphinha at Elland Road?

The current situation at Elland Road is very unsettling with the Yorkshire club on the brink of relegation if results don’t go their way with only 3 more games to go. The departure of Raphinha seems inevitable and the signing of Traore seems to be smart. According to FBRef, the £25.2m-rated maestro ranks in the top 1% of wingers in Europe’s big five leagues for dribbles completed per 90 minutes, in addition to the top 4% for progressive carries, the top 12% for touches in the opposition penalty area, the top 24% for shot-creating actions and the top 29% for aerial duels won over the last 365 days.

The Wolves attacker is also proven in the Premier League, with his best campaign for Wolves coming in the 2019/20 season. Over his 37 top-flight appearances that season, Traore scored four goals, registered nine assists and created 10 big chances for his teammates, along with taking 1.2 shots, making 1.3 key passes and completing 4.9 dribbles per game.

If Jesse Marsch can bring out the best in the Spaniard, the sky is the limit for Leeds’ attack next season with Traore having the potential of being the Peacocks’ X factor. His ability to decide games on his own will be crucial to Leeds in the Premier League(if they survive the relegation scrap) or the Championship next season.