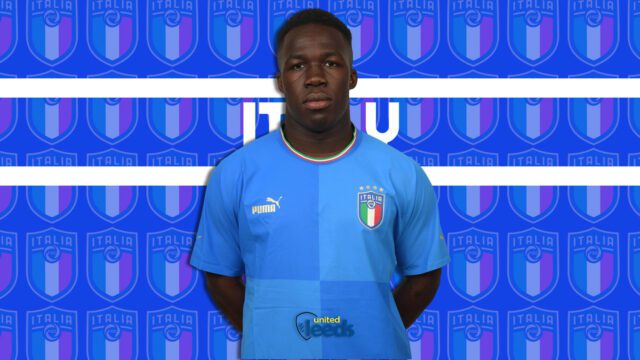 According to reports, Leeds United are in talks to sign Italian international Wilfried Gnonto.

Italy is now fast becoming a breeding ground of new and talented young players like Ivan Ilic, Felix Afena-Gyan & Matias Soule all coming out of Serie A. This is an important step as Azzurri tries to rebuild their national team and develop young players in the league after they were called by numerous fans to bed in youngsters after the humiliation of not making it to the Qatar 2022 World Cup.

A player tipped for stardom

Willy Gnonto was tipped for stardom right from a very young age. He is a product of Inter Milan’s academy and was born to parents of Ivory Coast nationality. He left Inter after it was very clear that Antonio Conte was going to prefer the experience of Romelu Lukaku and Lautaro Martinez as opposed to trusting young prospects and was very unhappy when Sebastiano Esposito was promoted to the senior squad by then-manager Antonio Conte instead of him.

And so, Wilfried ended up joining Swiss club Zurich in order to get regular game time. After a tough settling in a period where he managed to score a single goal in the entire season, Willy exploded in the 2021-22 season and bagged 10 goals as Zurich won their 13th title with four games to spare.

He was mostly used as an impact sub, coming on 24 times in 33 matches. Playing against already tired defences, Gnonto punished mistakes from the opposition and was the second highest-scoring substitute in Europe in 2021-22.

Standing at 5ft 5in, Gnonto might look small physically but that is not the case. He possesses impressive strength despite his short stature. A case in point is Alexandre Lacazette who stood at 5ft 7in, also looked a bit small playing against big Premier defences but in actuality possessed great strength which deceived a lot of his opposite numbers.

Gnonto can play across all the positions in the front line but mainly prefers to play as a striker. He was often paired with another striker in Zurich playing as a support striker.

He is also blessed with blistering pace and is an exceptional dribbler, capable of going both right and left. For his age, he is already quite polished and has a lot of confidence in his talents and abilities. He always looks to take on his opposite number, a sign which shows his confidence. He is also a very positive influence in dressing rooms which helps to build chemistry between teammates.

As the title suggests, he is indeed a big fan of Chelsea forward Raheem Sterling and he also got a chance to play against his idol when Italy clashed with England in a UEFA Nations League game.

Internationally also the 18-year-old has looked really decent when given the chance. In his debut when his side needed an opener, Gnonto came on and set up Lorenzo Pellegrini’s goal within five minutes. He was awarded a start against Hungary where he almost scored.

Who are the other teams competing for Wilfried Gnonto?

Journalist Nicolo Schira has reported that Leeds are expected to open talks with his club next week in order to pursue a transfer but will face stiff competition from Serie A clubs like Sassuolo, Fiorentina, and Torino, especially from Sassuolo, who have lost Gianluca Scamacca to West Ham United and are expected to lose Giacomo Raspadori and Torino who have lost one of their greatest players in modern history, Italian international Andrea Belotti who scored 100 Serie A goals in seven seasons.

Should Leeds pursue this target?

It’s a really hard one to tell right now. While Gnonto has shown immense potential in the Swiss Super League, there is a good chance that his physicality will be challenged on multiple occasions with better quality of defenders in the Premier League. He is also a bit raw and needs to start getting more starts for his club.

His caps for the Italian national team make a real case to go for him but really comes to the fee. Rodrigo has not proven to be a great buy though he has looked more than decent this season while Bamford is struggling with a lot of injury issues. If Gnonto makes the same impact from the bench as he is doing in Switzerland against tired legs, this could be a really smart pickup otherwise if Leeds needs a new starting striker they should look somewhere else as of now.