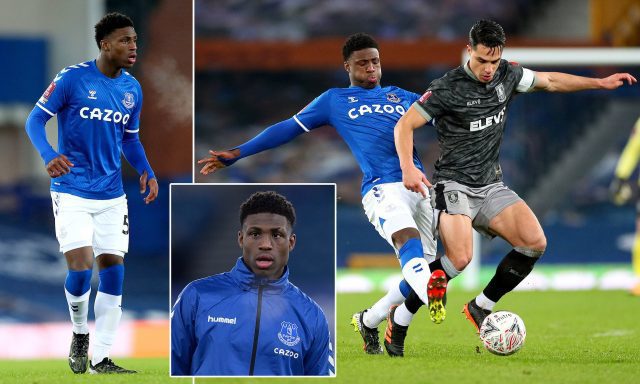 Thierry Small raised a lot of eyebrows when he made his debut for Everton in the FA Cup in January 2021. At a tender age of 16 years and 176 days, Small became the youngest player to play for Everton, breaking the previously held record by 15 days. Highly rated in the youth setup, it is no wonder that he has got many big clubs after him.

Many have wondered if his debut against Sheffield Wednesday was a gesture by manager Carlo Ancelotti to prevent the youngster from leaving. According to various news outlets, the Englishman has been offered a three-year contract from the day he turns eighteen, but he is yet to sign it. Big clubs such as Bayern Munich, Arsenal, and Juventus have been sniffing around the player. This had made Small think more carefully about his future and that could prevent him from signing a contract with Everton.

A surprise entrant in the race for the left-back are historical club Leeds United. They are gearing up to offer the youngster a contract as it is understood that Thierry Small is frustrated with the lack of first-team opportunities with Frenchman Lucas Digne very difficult to dislodge from the left-back spot. Leeds United manager Marcelo Bielsa is reportedly prepared to offer Small a chance in the first team. Thierry Small has found it difficult to get first-team training chances too and is said to be fed up with it.

Leeds has a history of giving young players a chance and Small could be yet another addition to that list. The highly-rated left-back is valued at a cheap £1 million and could be a star in the making. Leeds United will be desperate not to miss out on Thierry Small and we could well see him in their traditional white kit at the Elland Road next season.