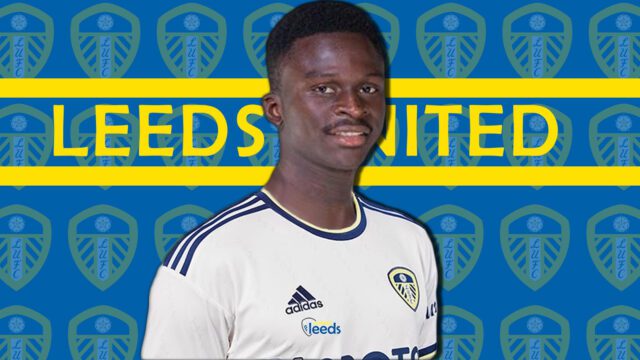 Leeds United are closing in on Marseille forward Bamba Dieng, who is set to sign for the Premier League club in a Deadline Day move. The Whites were also chasing a couple of other options, but are now said to be close to completing a deal for the 22-year-old Senegalese forward.

Olympique Marseille, the French club, have accepted an official bid from Leeds United which is reportedly in the region of €10 million, with add-ons included. The Premier League club were looking at many options including PSV forward Cody Gakpo, who was also the subject of interest from Man United, but the deal for him collapsed after the Dutch club was unwilling to negotiate.

The Whites also tried to sign Hwang Hee-chan from Wolverhampton Wanderers, but the club were not open to letting the forward go, and considered him important to their plans. Leeds United then approached Marseille for a potential deal, and talks between the two clubs progressed very quickly. The Deadline Day is always a very intense day, with time running out for clubs to sign the players they want. The deal for Dieng is set to go down to the wire, and it will be a race against time for the Peacocks to submit the paperwork for their new signing before the 11 pm deadline in the UK.

According to reporter Fabrizio Romano, the deal worth around €10 million was considered a satisfactory bid by the French club for the Senegalese forward, and Bamba Dieng is expected in Leeds later today for a medical after they accepted the bid. Foot Mercato reported that Dieng was close to joining fellow Ligue 1 club Lorient, but a late bid from Leeds helped him change his decision as the player’s preferred destination was the Premier League.

Leeds official bid for Bamba Dieng has been accepted by OM — it’s around €10m fee with add-ons included. 🚨 #LUFC #DeadlineDay

Leeds wanted Hwang but Wolves are not open to let him go.

A striker’s arrival in Leeds will be much welcomed by the fans and manager Jesse Marsch, after their main striker Patrick Bamford’s injury concerns continued. The Englishman has been out injured for the past few weeks, and Daniel James has had to deputize for the striker. The arrival of a natural striker who can provide backup for Patrick Bamford will be much appreciated, with James’ preferred position being on the flank.

The 22-year-old had his breakthrough last season, making 25 appearances in the league and scoring 7 times for the French giants. His preferred position is the number 9 role, but he is equally effective on either flank or as a number 10, providing a host of options to Jesse Marsch at Leeds United. Although the forward is largely unproven, his talent and skill was evident from his performances in Ligue 1 last season. He is a very strong finisher, and can hold the ball up fairly well. The Senegalese international is very fast, and a very lethal option on the counter-attack. Leeds United could be walking away with a very smart piece of business on a day where many clubs are induced into panic buys.

Bamba Dieng’s arrival on a permanent basis could signal the departure of Daniel James who has been the subject of interest from Tottenham Hotspur and Fulham. Fabrizio Romano has been reporting that the two London clubs are keen to add the speedster to their squads, and he could be on his way out, although it remains to see how any potential move progress, with just a few hours remaining. For now, Leeds United fans are excited to welcome Bamba Dieng, who is set to arrive in Leeds soon, and become the latest arrival at Elland Road.