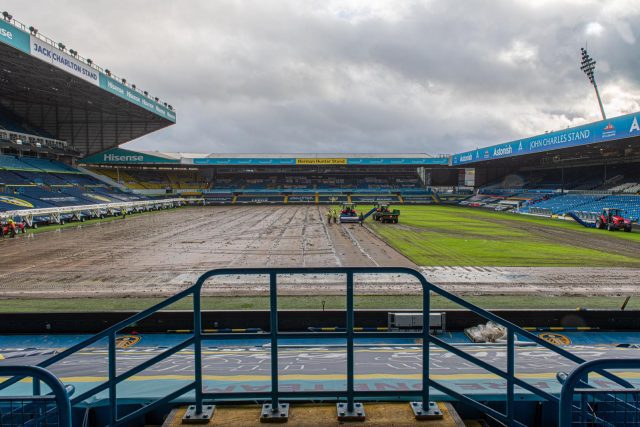 Leeds United are set to re-turf Elland Road with a new hybrid pitch.

Due to recent bad weather effects in the region, Leeds are preparing to re-turf Elland Road with a hybrid pitch which will be installed before Leeds United’s Premier League meeting against Everton on 3rd February.

They are already planning to complete a full pitch reconstruction at Elland Road, which will include a new drainage system and this work will start in May. The pitch at Elland Road is 25 years old and has become difficult to maintain due to the recent tricky weather conditions.

According to reports, Leeds will pay £300,000 to buy a new surface from Premier League rivals Tottenham Hotspur which is just a timely solution until the end of the season. The last time Leeds played at Elland Road was against Brighton where they lost 1-0 to them on Saturday. A gap of almost 17 days since Leeds next play at home has given them a chance to work on the pitch and find better solutions.

Leeds was bound to play Southampton on Wednesday but the match was postponed to allow Southampton to complete their FA Cup tie with Shrewsbury. This has helped Leeds in terms of their pitch problems. The permanent solution will take at least 14 weeks for installation, therefore they have invested in a short-term process that will help them complete their season with ease.

Leeds United Head of Facilities Mark Broadley said, “We have been working closely with Hewitt Sportsturf on a proposal to fully reconstruct the Elland Road pitch this summer.”

“However, after the recent heavy rainfall and snow in Leeds, it became evident that the current system was unable to cope and as a result was struggling to retain sufficient stability in the top surface.”

“We reviewed all options available and agreed the best possible solution was to remove the top surface and install the hybrid turf system HT Pro as seen at Tottenham Hotspur and Swansea City.”