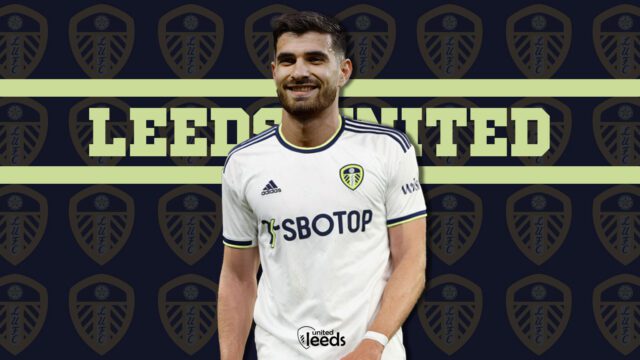 Leeds United are targeting a few more players to strengthen their squad before the transfer window slams shut in about two weeks, and manager Jesse Marsch has identified a crucial area that he wants to prioritize before the end of the summer transfer window. The Peacocks are interested in signing a wide attacker, with the name of Frenchman Martin Terrier cropping up. Leeds United are yet to adequately replace Raphinha, who left for Barcelona this summer after an intense transfer saga between the Spanish club and Chelsea.

Reports out of France suggest that Leeds United will have to fork out around £35 million for the Frenchman, who is currently plying his trade for Stade Rennais in Ligue 1. That amount would see Terrier become the most expensive player in Leeds United’s history, with the West Yorkshire club already having broken their transfer record once this summer in the form of American midfielder Brenden Aaronson.

Martin Terrier is predominantly a left winger, but his versatility enables him to play as a centre-forward and even as an attacking midfielder at times. Leeds’ current attack consists of Rodrigo, Jack Harrison, Patrick Bamford, Daniel James, and youngsters Joe Gelhardt, Sam Greenwood, and Crysencio Summerville. However, with Patrick Bamford struggling with injuries, manager Jesse Marsch is reportedly on the lookout in the market for a player of good quality to help improve the attack.

Leeds have enjoyed a decent start to the season, going unbeaten in the first two games as they sit 6th in the table. An attack with depth and quality will go a long way in helping Leeds survive another season in the top-flight, after a close call last season. Terrier is a proven goal-scorer and an equally good creator, finishing the 2021/22 Ligue 1 season with 21 goals and 4 assists in 37 appearances. He was the third highest goal scorer in the French league, exceeding all expectations. The forward created 1.4 chances per 90 minutes last season, and an impressive 3.6 ball recoveries per 90 minutes, also highlighting his underrated defensive contribution to the team.

Rennes manager Bruno Genesio switched the Frenchman’s position from a left winger to a center-forward owing to his superb numbers, and since then Terrier has alternated between the two roles, forming a lethal partnership with Gaetan Laborde. Genesio has helped the forward blossom into a ruthless finisher, which has caught the eye of several clubs across Europe. Jesse Marsch has been impressed with the 25-year-old’s talent and understanding of the game and has envisaged him forming partnerships with the likes of Bamford and Rodrigo and new signing Aaronson. The Frenchman would be a terrific addition to the Leeds attacking lineup, especially with his penchant for cutting inside from the flank when on the ball and his eye for a pass.

Leeds have earmarked a few wide players along with Terrier, with Watford winger Ismaila Sarr and Southampton’s Che Adams also heavily linked with the club. The Frenchman is a highly-sought after target, but the fee could be off-putting for the Peacocks.

Rennes have an excellent recent history of producing outstanding talent, with Ousmane Dembele, Raphina and Edouardo Camavinga some of the talents they have produced over the past few years. Martin Terrier could be an addition to that list, and with his flair being noticed now, it could be a very good time for him to make a move to one of the best leagues in the world. It remains to see if Leeds United can complete the signing of Martin Terrier before the end of the transfer window.