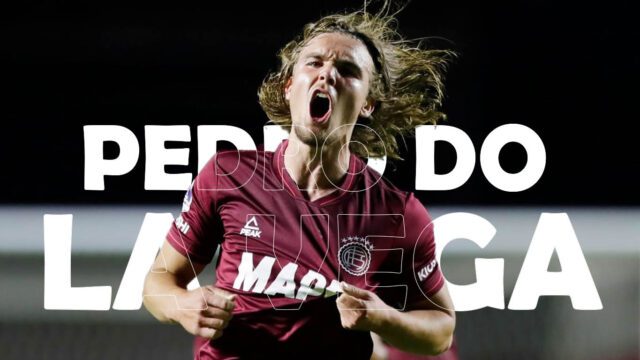 Young forwards are currently the hottest property in the game, and few managers in world football can make better use of strikers than Marcelo Bielsa at Leeds United. Patrick Bamford has become one of the best strikers in the Premier League under El Loco (Marcelo Bielsa) and Leeds are now looking to recruit a young partner for Bamford upfront, with Pedro de La Vega, a top priority for the club.

A product of Club Atlético Lanús, Pedro de La Vega was promoted to the senior squad in July 2018, and has developed into a fine young forward for the club. Although the Argentine has only contributed to 15 goals in 67 appearances for the club over the three years, his potential is supreme.

One of his key features is that the player never stops running, and Bielsa loves this feature about the player. Endless running and determined to score all the time, Pedro Vega is an intelligent forward who presses from the front, while he is also is quick on the counter-attack. The forward is only averaging 1.5 shots on target per 90 minutes this season, but in a creative Leeds side, he could be relentless.

His 80% pass completion rate for a forward is also an admirable quality as it means that the Argentine is playing the right passes in the final third. While Pedro’s movement could be a little better, Marcelo Bielsa knows that he can tap the player’s huge potential in no time.

It is also worth noting that the forward has scored 7 goals in 364 minutes this year, a goal every 52 minutes played. This is incredible potency from a 20-year-old playing in one of the more weaker teams in Argentina.

Leeds broke the record last year when they signed Rodrigo for £30 million, however, the Spaniard has not adjusted to life in England just yet. While Leeds could still churn out a profit by selling the 30-year-old, Pedro de La Vega could be the perfect replacement for him.

Additionally, the likes of Raphinha and Jack Harrison need competition from the bench, and Pedro could certainly do that. It would also be a dream for the young Argentine to play under, possibly the best Argentine manager in Marcelo Bielsa.

Are Leeds close to agreeing on a deal for Pedro?

While Leeds United have made their interest clear to Lanús, they do face competition from Fiorentina and Atalanta for the Argentine. While Atalanta could guarantee Champions League football to the youngster, Leeds can offer higher wages and the chance to work with Bielsa.

The Whites had also tried to sign the player last year but disagreed on the player’s £3.6 million valuation. Since then, Lanús have more than doubled the price on the player (£8.6 million) as the player still has 2 more years on his contract, and he has only improved in the last 12 months.

However, Leeds are ready to pay that amount and want to seal the deal for the youngster as soon as possible. Pedro is one of the potent young forwards, and it would be a good deal for the Whites if they could bring in a young and hungry forward before the start of the 2021/22 season.