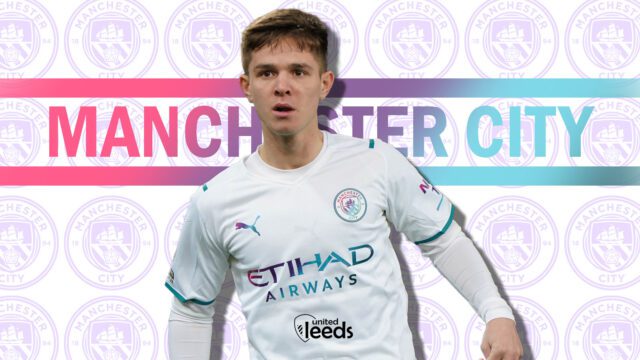 Leeds United are reportedly looking to secure a permanent deal for Manchester City’s 19-year-old midfielder James McAtee as the club aims to rope in young prospects ahead of the upcoming campaign. Having already acquired the services of Marc Roca from Bayern Munich alongside USA international Brenden Aaronson and Rasmus Kristensen from RB Salzburg, Leeds United seem keen on re-investing into their squad in a bid to avoid a repeat of last season’s inconsistent run of form.

With Kalvin Phillips’ move to Manchester City imminent and Leeds United likely to continue with their strategy of acquiring promising youngsters from clubs across the Premier League, McAtee emerges as the latest addition to the list. Having previously secured a promising prospect in Lewis Bate from Chelsea alongside providing adequate game-time for highly-regarded youngsters such as Joe Gelhardt and Sam Greenwood, the Whites are expected to continue focusing on developing the talent at hand under Jesse Marsch’s reign as club manager.

A product of the Manchester City academy, McAtee has enjoyed a steady rise through the ranks having made six senior team appearances last season. Regarded amongst the club’s most promising prospects, the youngster registered 17 goals and seven assists in 22 Premier League 2 games for U-23’s side being the top-scorer alongside bagging the division’s player of the year award. Moreover, having garnered praise from both Pep Guardiola and City CEO Ferran Soriano in recent months, McAtee is likely to develop into a top player for club and country over the coming years.

A Star On The Rise

McAtee has established himself amongst City’s most highly-revered academy prospects. An England U-20 international, the attacking midfielder has tasted relative success in the developmental stage of his career.

While primarily deployed as a number ten, the youngster is also capable of functioning in a box-to-box role. Known for his technical ability and sharpness in possession, the midfielder’s attributes reflect his favourite player – David Silva – in most aspects of the game. Moreover, nicknamed the “Salford Silva”, McAtee boasts an exceptional understanding of movement and attacking spaces whilst retaining an exquisite passing range and ability to control the game from midfield.

With Leeds United expected to sign a couple of midfielders in a bid to replace the departing Phillips, McAtee emerges as a versatile and promising candidate for the club this summer. While similar to Mateusz Klich,32, in his versatility, McAtee emerges as a comparably superior technician with higher potential for growth given the need to add fresh legs in the team’s midfield next season.

Having previously attracted interest from Southampton alongside Leeds United, the midfielder is likely to assess his options considering City’s wealth of talent across the midfield, despite only signing a three-year contract extension earlier this year. However, being amongst the most promising prospects emerging from the club’s academy, City and Guardiola are likely to avoid sanctioning a permanent deal for the youngster this summer.

Having witnessed the steady rise of Phil Foden in recent years, City are likely to continue integrating their academy prospects into the first-team set-up. Additionally, having granted a handful of opportunities for the youngster last season, Guardiola remains unlikely to part ways with the youngster anytime soon. Nevertheless, given the possibility of securing, at least, a season-long loan deal for the midfielder given City’s priorities next season, Leeds United will be keen on testing the waters for his McAtee’s services this summer.