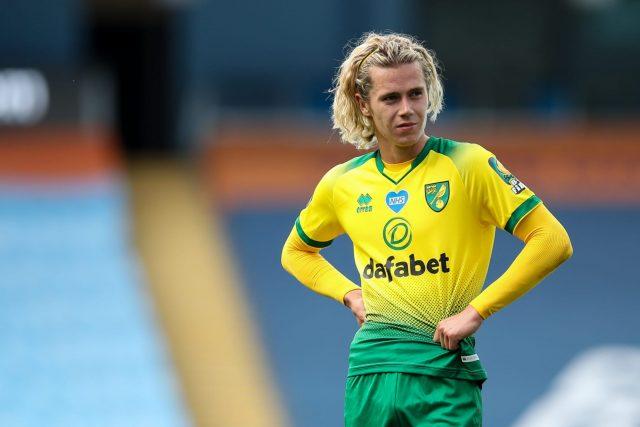 Leeds United are still in the market as the club has been linked with Todd Cantwell again.

The club can still sign players from the EFL and Cantwell is always in the news. The Norwich City’s midfielder wasn’t in the team’s line-up for their match against Derby County at the weekend, which they lost through a Wayne Rooney’s well struck free kick.

The England U21 international who scored six goals for Norwich City in the Premier League last season is showing signs of wanting to go back to the Premier League as soon as possible. His coach, Daniel Farke who didn’t include him in the past two match day squads because of his wrong attitude in training, insisted that Cantwell is in his plans and not for sale.

Cantwell’s possession of the ball and eye for goal would surely benefit Leeds and his game will improve further playing under Bielsa.

Raphinha’s signing might have poured cold water on Cantwell’s link to the club, but signing him will bring more competition and versatility to the team. He is a young player with premiership experience, and he will fit into Bielsa’s brand of football. He will add to the depth of the squad and might force his way into the first team.

Norwich will be loathe to lose him, but they have done without him in the past two matches. So, Leeds can still tempt Norwich with a relatively good offer to sell.

The next twenty days will determine if Leeds will eventually sign him or stay with the present squad that is also good enough to keep the team in the Premier League.