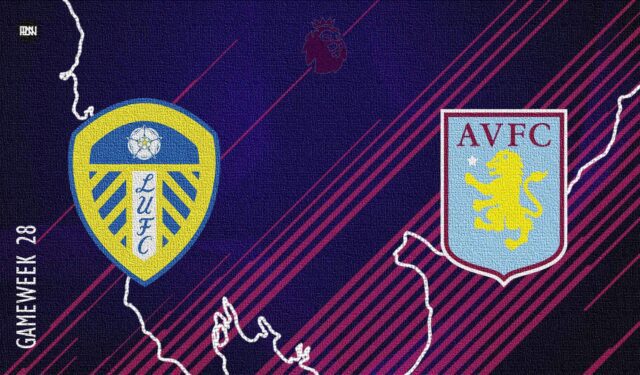 The relegation battle in the Premier League is growing more intense as the weeks’ tick by, and as many as 6 teams are all fighting to avoid being finishing in those feared last three spots. With about 10 matches to go, it’s all to play for now, and every point will be very crucial in deciding the finishing order at the end of the season. In the midweek PL fixtures, we see relegation-threatened Leeds United take on Aston Villa at Elland Road, in what is a must win fixture for the Peacocks.

Leeds United have recently gone through a big change at the club, with legendary manager Marcelo Bielsa parting ways with the club, after a string of poor results. American manager Jesse Marsch was named as his replacement, with the former RB Leipzig coach signing a three-year deal with the Peacocks. His first match with Leeds United came against Leicester City away from home last weekend, ending in a 1-0 defeat. He faces the unenviable task of leading Leeds to survival, and with 6 losses and a draw in the last 7 games, it could prove to be a very difficult task for the Yorkshire-based team. Their last game against Leicester City, despite ending in defeat, gave them plenty of positives to take away. The fans were treated to a strong and resilient display, and although they conceded just one goal, it was a relief from the barrage of goals against them, 14 in the last three games. They now take on an Aston Villa side which is looking lively under Steven Gerrard, and Leeds fans and manager Jesse Marsch will hope that they can get a positive result at Elland Road.

Aston Villa have had 8 wins in 15 games since legendary English midfielder Steven Gerrard’s appointment, and their playing style has improved since the beginning of the season under Dean Smith. Gerrard has shown his potential at the helm, and although they have not shown consistency, there are signs of promise. Villa are now on a two game-winning run, having beaten Brighton and Hove Albion 2-0 away from home and Southampton 4-0 at home last weekend. The two consecutive wins meant that Villa had picked up their first back-to-back wins since November 2021. Gerrard has also shown promise in the transfer market, with both his January signings hitting the ground running. Phillipe Coutinho has been a shining star in the team since his arrival, and there are rumours that his move could be made permanent should he continue the same form. Villa’s last result saw them climb up to 11th and are now level on points with 10th placed Crystal Palace with two games in hand over the Eagles.

Leeds United welcomed back striker Patrick Bamford to the squad against Leicester City last weekend, after his lengthy spell on the sidelines. Marsch has confirmed that Bamford will play against Aston Villa, albeit not the full 90 minutes. The American coach has stated that the Englishman will feature from the bench as he looks to ease in his star-striker. He also confirmed the return of Liam Cooper to training, although it seems unlikely the defender will feature in the game. Adam Forshaw and Diego Llorente are in line to return to the starting lineups, while defensive midfielder Kalvin Phillips is still a few days away from his return.

Aston Villa will have a very strong squad at his disposal on Thursday night, confirmed Steven Gerrard, and he will intend to choose a strong lineup to keep their strong run going. Midfielder Marvelous Nakamba is set to remain out for a while, although youngster Carney Chukwuemeka is all set to return to the squad. Defenders Ezri Konsa and January signing Lucas Digne are also back in contention and could be in line to start at Elland Road. Ollie Watkins and Danny Ings have shown a good partnership as the front two, and they will be expected to start up-front again on Thursday.

Leeds United have been rocked by injuries, which has derailed their season. Injuries to key players at the start of the season saw the Peacocks go on a miserable run of form, failing to win their first six league games. Known for their free-scoring free conceding style of play, Leeds failed to show any attacking threat this season. Instead, they conceded a stupefying 61 goals in 27 games so far, and their terrible defending and poor results eventually led to the sacking of Argentinian coach Marcelo Bielsa. Jesse Marsch was since named his successor, and his first game in charge saw a positive display from the Yorkshire side. He faces an uphill task now, beginning with his first home game in charge against a brilliant attacking side in Aston Villa.

Villa have hit form at the right time, with Danny Ings, Ollie Watkins, Phil Coutinho and others contributing and linking up extremely well in attack. Manager Steven Gerrard has shifted to a diamond 4 in the midfield, with Coutinho acting as the number 10. This has allowed him to start with two strikers upfront, and Danny Ings and Ollie Watkins are two of the most intelligent and prolific strikers in the league. Ings has not had the best first season with his new club, but scoring against his old club last weekend will have acted as a boost for the Englishman, and Gerrard will hope that he can kick on from there. However, all the headlines have been about Phillipe Coutinho and rightly so. Spearheading the diamond midfield, Coutinho seems to have returned to his old form. He is showing signs of his old self, taking on defenders, making runs into the box and always seeming to pick out a man with his pass. A goal and an assist against Southampton has taken his numbers up to 3 goals and 3 assists in 7 games.

A feeble Leeds defence will be put through a very stern test on Thursday. Similarly, their attack will have a tough task to score against a side that has kept two consecutive clean-sheets coming to Elland Road. It will definitely be an amazing watch for any neutral.

Brazilian winger Raphinha has been one of the shining lights in the Leeds United lineup, attracting interest from elite clubs like Liverpool, Dortmund, and Barcelona. So far, he has scored 9 goals in 26 matches for Leeds and is their top scorer in the league. Although Leeds have not been impressive this season, Raphinha has performed well for a fair number of games. He has had to adjust his playing style and position this season to cope with the injuries the Peacocks have had and has not been able to produce his best numbers as a result. He has lacked a prolific goalscorer to convert his chances, and he will be happy to see Patrick Bamford back fit again. Raphinha will be expected to lead the Leeds attack again on Thursday.

The talented Brazilian, widely known as ‘the Little Magician’, is no stranger to the Premier League, setting the league on fire during his time with Liverpool. His performances with the Reds brought the attention of Spanish giants Barcelona, who paid a record £142 million for the forward in 2018. However, the move did not quite work out for both parties, and Coutinho failed to recreate his magic at Camp Nou. As a result of poor displays, he was loaned to Bayern Munich in the 19-20 season, helping the Germans to a treble. He returned to Barca the following season, playing occasionally until late December when he suffered a season-ending injury. Since then, the Brazilian has been in and out of the squad, and frustrated with the lack of playing time, joined English club Aston Villa on loan in January of this season.

He made an instant impact at Villa Park, scoring on his debut against Man United, as Villa fought from 2 goals down to earn a point. He carried that form into the next games, assisting twice and scoring once in the game against Leeds United. Coutinho did not have the best of times against Newcastle in the last game, but former teammate and now manager Steven Gerrard has called on the Brazilian to show his talent in the upcoming games, and he repaid the faith shown him with a superb display against Southampton. Expect him to be the one to watch out for again.