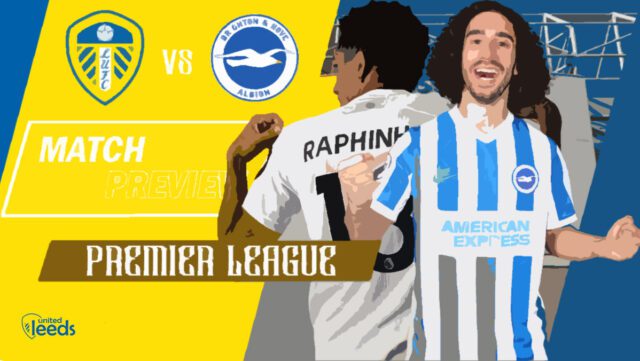 Leeds United host Brighton & Hove Albion at Elland Road this weekend as the Whites look to claw out of the relegation zone over their remaining fixtures. With both sides heading into the tie on the back of an incomparable run of form, the visitors will be keen on securing their third consecutive victory while the hosts will be looking to secure their first points after losing their last three league outings, in a bid to move out of the relegation zone over the coming weeks.

A 0-3 result against Chelsea saw Leeds United suffer their third consecutive loss in the league on Wednesday. With Jesse Marsch’s side enduring a severe dip in form amidst the real possibility of relegation, the game against Brighton serves as a crucial juncture for the club’s prospects of retaining their place in the Premier League for next season. Moreover, with only two points separating them and 16th place Everton, the hosts will be keen on securing maximum points this Saturday.

On the other hand, a compelling 4-0 victory over Manchester United saw Brighton & Hove Albion secure their biggest win in England’s top-tier league last weekend. Having suffered only one defeat in their last five league outings, Graham Potter’s side will be looking to secure a top-half finish at the end of the campaign. Moreover, with the team having defeated three of the traditional ‘top-six’ in their last five outings, the Seagulls will be favouring a positive three points this weekend.

A red card for Daniel James against Chelsea means that the Welshman will remain suspended for the remainder of the season. Luke Ayling too, remains suspended following his sending off against Arsenal, while all of Adam Forshaw, Tyler Roberts, Stuart Dallas, Crysencio Summerville, and Jack Harrison remain out of contention for the weekend. However, Raphinha is likely to retain his place in the starting line-up despite suffering from a cramp against Chelsea, with Patrick Bamford too expected to make an appearance against Brighton on Saturday.

Graham Potter is expected to have the majority of the squad at his disposal on Saturday, with the Seagulls unlikely to have picked up additional injuries following their victory against United last weekend. Amongst the absentees, Jakub Moder remains on the sidelines due to an ACL injury, while Enock Mwepu remains doubtful, with Potter expected to provide an update on his fitness in the press conference ahead of the tie.

With both teams in need of maximum points, Saturday’s encounter is likely to produce a gripping watch for every viewer. Having struggled to secure points, Leeds United will be looking to avoid a dampening result while the visitors will be favouring a comfortable three points after registering dominating victories in their recent outings.

A lack of incisive movement and play across the attacking third has seen Leeds United struggle to create goal-scoring opportunities in their recent outings. With Brighton expected to dominate possession amidst the likeliness of creating several goal-scoring chances, the hosts will be keen on nullifying their transitions down the flanks whilst remaining imposing in defence and on set-pieces on Saturday. Moreover, with the hosts unlikely to dominate the game, Marsch’s side will be looking to make the most of their goal-scoring opportunities at the weekend.

Following a well-deserved three points against the Red Devils, Brighton will be keen on extending their string of impressive results over the remainder of the season. Expected to dominate possession against Leeds, the Seagulls will be looking to exploit the opposition’s weakness on the flanks whilst making the most of their set-piece opportunities at the weekend. Having delivered notable performance across all departments in recent outings, the visitors remain the overwhelming favourites for three points on Saturday.

With Brighton expected to provide a challenging midfield battle, Kalvin Phillips will be relied upon to anchor Leeds’ transitions on Saturday. Expected to play a significant role if the team is to secure maximum points over the remaining fixtures, Phillips’ defensive contributions combined with his ability to deliver in attack will be key to Leeds’ prospects of avoiding a dampening result on Saturday.

Brighton’s most notable performer in recent weeks, Cucurella will be looking to exploit the opposition’s weakness of the right flank throughout the game on Saturday. Fresh off scoring an impressive goal against United, the young Spaniard will be keen on being a nuisance to cope with at the weekend whilst looking to serve as a potent threat in transitions against an unpredictable Leeds defence this Saturday.