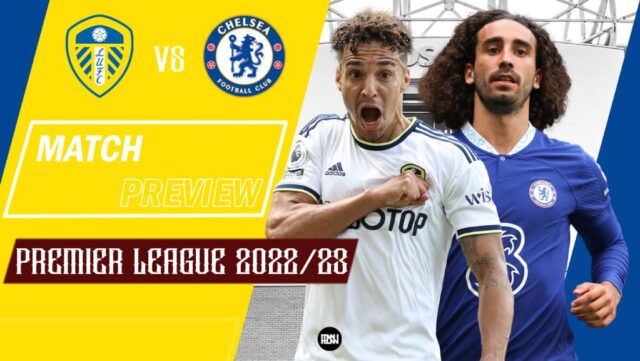 It’s matchday 3 in the Premier League and Leeds United will be hosting Chelsea at Elland Road as both the teams remain unbeaten in their opening two matches. Chelsea were held to a 2-2 draw after a Harry Kane equalizer in the 96th minute in a fiercely contested London Derby which saw managers of both the teams receive red cards after clashing on the touchline. Jesse Marsch’s Leeds have had an unbeaten start to their season as the Peacocks drew in their last outing away to Southampton held by a late Kyle Walker-Peters helping the Saints complete their comeback from 2-0 down.

Marsch began the season with injury problems in the squad with a number of first-team players out. For the game against Chelsea, the American will be without Stuart Dallas, Luke Ayling and Junior Firpo who have picked up injuries during the pre-season. A major miss for the game against the Blues will be striker Patrick Bamford who limped off in the 28th minute in the game against Southampton. The 28-year-old who just made his injury return after missing the majority of the last season on the sidelines will yet again miss out on a few games with an adductor injury. There’s some positive news for the Peacocks Liam Cooper and Joe Gelhardt are expected to be fit for the game.

Tuchel will be without N’golo Kante for the game after the Frenchman looked like he pulled his hamstring in the intense game against Spurs with reports saying he could be out for at least 3-4 weeks. The German described his injury as “serious” which could leave the midfielder out for “several weeks”. Armando Broja will also not be available after the Albanian picked a small knock in training and Christian Pulisic is a doubt for the match. Mateo Kovacic continues to recover from his knee injury and will miss his second consecutive game.

Jesse Marsch’s philosophy of pressing high and playing vertical is visible in the Peacocks’ playing style which means the American has had a great pre-season as his side looks well-adjusted to his tactics. The American has deployed his usual 4-2-3-1 formation in the opening two games of the season in which the front 4 have combined well with great linkup play between them causing havoc in the final third. The midfield pivot of Tyler Adams and Marc Roca in the middle of the park looks solid and their ball distribution has been key in Leeds’ build-up play. This partnership could be important against a depleted Chelsea midfield who will be without Mateo Kovacic and N’golo Kante for the trip to Yorkshire. The midfield tactical battle will be an interesting watch.

Chelsea have started the season with 1 win and a frustrating draw even though the game against Spurs was the best the team has looked in a long time. Ruben Loftus Cheek played as a right-wing back and was the X factor throughout the game for Chelsea. He was instructed to play as an inverted wingback adding an extra man in the middle of the park along with Mason Mount who dropped deep from his no.10 role to form a box-typed midfield of Kante-Jorginho-Loftus Cheek-Mount against the double pivot of Tottenham Hotspur. This tactical tweak by Tuchel which changed the Blues’ formation from an initial 3-4-3 to a 2-4-4 while attacking worked wonders. This could be seen in future matches against teams with a double pivot by the German as it added more solidity to the midfield and extra cover for any potential counterattacks while also having a man-to-man positioning against the opposition backline in the final third.

Last weekend against Spurs, the English defender was outstanding and also scored a goal. He constantly bombed forward to expose the Spurs back five and delivered crosses into the area for Havertz to score. James statistically is the most dangerous attacking player for Chelsea with an average of 0.25 Non Penalty goals per 90. His stats in creating chances for his side also speak volumes about the talent the Englishman has with an average of 4.35 progressive per 90 putting him in the top 3% out of the defenders in the league, 3.71 shot creating actions per 90 which is amongst the top 2% in the league and 0.32 assists per 90 which is also amongst the top 2% in the league.

To neutralise James’ attacking danger for the full 90 minutes, Leeds’ porous defence, which let up twice in the space of 15 minutes in the second half to blow a 2-0 lead, must keep him quiet. The absence of Junior Firpo as left-back could prove to be costly as James will be looking to exploit that side of the pitch.

The Spaniard has his home debut last time and looked lively in the left wingback position. Ben Chilwell’s absence wasn’t noticed at Stamford Bridge because the replacement player fit right in and delivered an all-around performance. The Tottenham defence struggled against the 25-year-quickness old’s and tenacity on the left flank. Due to Cucurella’s outstanding defensive play, Dejan Kulusevski only received 23 touches during the entire game

The Spaniard has 3 goals in the opening two games making him the top scorer in the league. Rodrigo will most likely play as a no.9 instead of the usual no.10 role he played in the first two games due to the absence of Bamford. Chelsea haven’t looked very solid in defence and Rodrigo could be the danger they will have to deal with should the 31-year-old start.