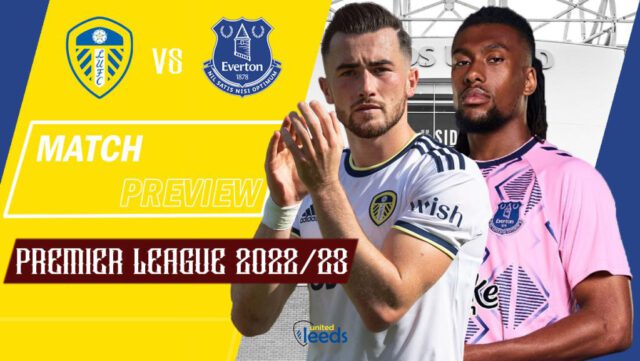 Everton travels to West Yorkshire to face Leeds United in the first-midweek match-day of the Premier League with the Toffees languishing in 18th place without a win so far. Frank Lampard’s men were held to a 1-1 draw by Thomas Frank’s Brentford after a disappointing afternoon owing to a poor attacking display. Leeds United meanwhile head into the fixture 5th in the table after a great start to their first full season under Jesse Marsch. Last time out, the Peacocks suffered a narrow 1-0 loss to an in-form Brighton side in a game which saw both sides missing a flurry of opportunities to seal the win.

The hosts Leeds were without Patrick Bamford for their last game and the Englishman could return to the starting XI for the game against Everton due to a groin injury. The Peacocks will be without Junior Firpo and Stuart Dallas, both out with long-term injuries picked up in the pre-season. With only 2 days of rest between their last game and the Everton game, Marsch could make changes in his starting XI to rest his key players to avoid any more injury problems.

Everton’s new signing Neil Maupay could make his debut for his side as Frank Lampard would want the French striker to hit the ground running. Dominic Calvert Lewin remains on the sidelines with an injury while Mason Holgate also picked up a knock against Brentford. Lampard could also opt to rotate his side to rest his players giving game time to the likes of Tom Davies, Seamus Coleman and Ruben Vinagre.

Everton have been struggling this season with no wins on the board yet. The absence of Dominic Calvert Lewin and Richarlison is evident as the Toffees aren’t clinical enough in the final third and lack the physical presence of a striker up top. Lampard’s started a fluid front trio of Dwight McNeil, Anthony Gordon and Demarai Gray in all the games so far and they haven’t looked all that convincing with the Toffees only scoring 3 times in 4 games this season. The arrival of Neil Maupay might be the solution to this problem and add the clinical edge to the side who are creating chances but aren’t able to finish them. It will certainly be a tough game against a Leeds side who have beaten Chelsea 3-0 at Stamford Bridge and have really stepped up their performances this season under Marsch. The Everton defence will have to be on top of their game to have any chance of winning the game as the likes of Rodrigo, Aaronson, Sinisterra and James will definitely cause havoc in the final third.

Jesse Marsch’s side have picked up 7 points from their first 4 games and the American’s side looks like genuine top 10 contenders. That being said it’s still early to predict what would happen by the end of the 38-game season but the early signs are really convincing. The recruitment of Victor Orta with the signings of Marc Roca, Tyler Adams and Luis Sinisterra to replace the outgoing Raphinha and Kalvin Phillips is spot on as the new arrivals have cemented a place in the starting XI. Facing a struggling Everton side who have failed to score more than once this season would be the perfect game to shrug off the 1-0 defeat against Brighton for the Peacocks.

The Spaniard has found his form and scored 4 goals in 4 appearances this season. Rodrigo is averaging 0.32 Non-Penalty goals per 90, 7.71 progressive passes received per 90 and 1.34 aerials won per 90 highlighting his all-round display this season. Everton have looked leaky in defence and the 31-year-old could increase his goal-scoring tally in front of the home supporters.

The 21-year-old has been the standout player in the Everton side as the youngster continues to impress. The winger was on the scoresheet against Brentford and looked involved in most of the chances his side created. He could be on the scoresheet again against Leeds United if Lampard’s game plan works helping his side get their first win of the season.