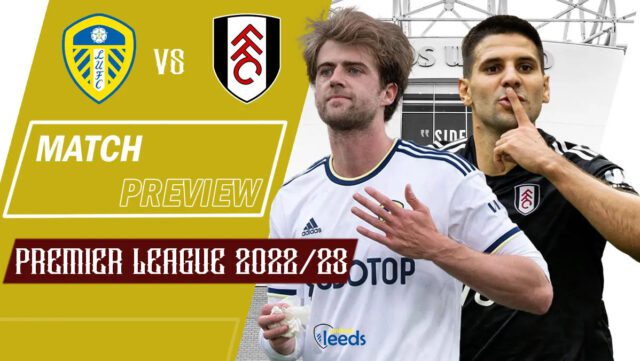 Elland Road hosts Fulham this Sunday as Leeds United look to battle further away from the relegation zone. The hosts sit uncomfortably close to the bottom three, with the same points as Wolves, leading only in terms of goal difference. The Whites haven’t seen a win since their sensational three-goal victory over Chelsea, two months ago. The men in the boardroom, at the moment, seem to be patient with Jesse Marsch, seeing his team’s performance against the league leaders, but for how long is a question.

Fulham on the other hand are enjoying an arguably more-than-descent position in the table, just a point behind Liverpool. Marco Silva’s men will be walking out on a full packed noisy Elland Road with the confidence of a 3-0 victory over Villa, which saw Steven Gerrard getting the sack. The Portuguese gaffer, during the press conference, seemed really pleased with his side’s midweek performance at Craven Cottage. But he didn’t evade the team’s defensive concerns as he pointed out to be happy with what is only the second clean sheet of the season on Friday.

Despite their difference in form, Sunday’s tie has all the potential to turn into an interesting spectacle. Leeds has only lost one game at home which came against the league leaders Arsenal. Fulham’s record on the road is not too promising as they have only managed to pick up 4 points in their 5 games away from home this season. The Whites will be looking to exploit the shaky backline of the Cottagers which have conceded 20 goals so far and is the only team with a negative goal difference in the top half of the table. Leeds United are not free of concerns either, conceding two against the Foxes on Friday. Mitrovic, the Serbian scoring machine, has scored 8 goals for Fulham this season and would be looking forward to adding a couple on Sunday. However, though not obvious, Fulham is more than just dependent on their main man up front for goals, as the stats show the next highest goal tally is just 2. If Leeds are able to contain the Serbian they have a good chance of coming out of the tie with a full three points, assuming that their hitters find the target on the other end.

The home team will most likely field their boys in their go-to 4-2-3-1 formation with either Bamford or Rodrigo up front. The American gaffer will probably prefer the latter who has found the net 4 times this season, over Bamford who is still awaiting his first one.

Jack Harrison, Sinisterra and Aaronson will be the first-choice three in the attacking midfield, unless Marsch wants to experiment with Rodrigo in the center.

The center midfield will be held by Adams and Roca. The latter who has got himself on the scoresheet once this season, will be looking to get into dangerous positions while simultaneously juggling his defensive duties.

The skipper Liam Cooper will partner up with Diego Llorente in defense, after Robin Koch failing to step up to the standards. Firpo is most likely to take the field along with Kristensen in the wing-back position, with Pascal Strujik battling against the clock to retain match fitness.

Regarding injuries, the availability of Archie Gray is still in doubt as he was in rehab due to a broken toe. Leo Fuhr Hjelde who is recovering from the appendectomy won’t be available until next week. As for Stuart Dallas, returning back before winter is a narrow possibility as he is still out with a thigh injury. Adam Forshaw, who is recovering from ankle surgery won’t be available until next month.

The cottagers would come out in a similar formation as their opponents with Mitrovic up front playing as the lone striker. The attacking mid is going to be lined up with Kebano and Andreas Periera playing alongside Willian, the 34-year-old Brazilian star who has returned to the Premier League after his spell in Brazil. This three men line-up is unlikely to change as Daniel James won’t be playing against his parent club.

Harrison and Palhinha will be playing in the center mid. The former, who is one of the second-highest scorers for the team this season, can prove to be a threat to the men in White. The back four will probably remain the same as against Villa with Bobby Reid, Diop, Ream and Robinson looking to hold the backline.

Kenne Tete, who is coming back from injury, might come off from the bench at Elland Road. Chalobah too, has completed his suspension period and is available for the trip on Sunday.

As for the news from the med room, Layvin Kurzawa is out due to a calf strain and so is Manor Solomon who is unavailable for long term after suffering an injury to the knee.