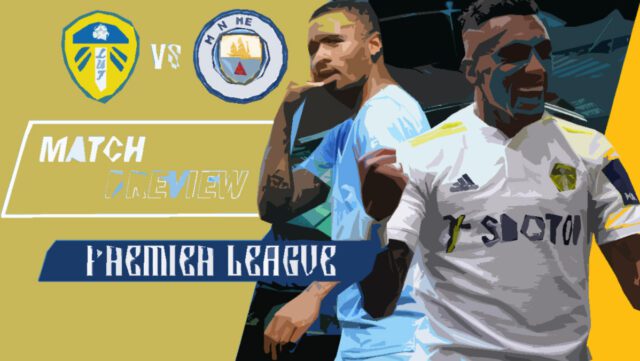 Leeds United host Manchester City on Saturday as the Premier League moves into its most challenging and intriguing part of the season. With both clubs entering on the back of no losses in each of their last five league outings, the tie at Elland Road could potentially change the tide of the title race moving forward.

A string of impressive results since the appointment of Jesse Marsch as club manager has seen Leeds gradually claw themselves out of the relegation zone in recent weeks. Having secured valuable points courtesy of significant squad members returning from injuries alongside vastly improving defensive displays, Leeds remain likely to increase their points tally over the remaining fixtures. Moreover, being one of only three teams yet to register a loss in their last five league fixtures, Marsch will be hopeful about securing a result against City on Saturday.

On the other hand, a thumping 5-1 victory over Watford followed by an invigorating 4-3 win against Real Madrid in Europe has seen Manchester City deliver their most awe-inspiring displays in recent weeks. With only a point separating them and second-placed Liverpool in the race for the Premier League title, a hiccup at Elland Road could potentially dent their prospects for a double at the end of the campaign. However, with little to show vis-à-vis complacency on the pitch, Pep Guardiola’s side remain the overwhelming favourites to secure the three points this weekend.

Patrick Bamford, Adam Forshaw, and Tyler Roberts remain unavailable for the tie against City, with the manager likely to provide an update regarding the players’ availability in the press conference later this afternoon. Having retained a consistent set of players during their upturn in results, Marsch is likely to stick with the same starting line-up that provided secured a crucial point against Crystal Palace, provided there emerge no injury scares before the game on Saturday.

Having missed out on the mid-week Champions League tie against Real Madrid, Guardiola is expected to provide an injury update on Kyle Walker and John Stones during his presser on Friday. Full-back Joao Cancelo is expected to return to the starting line-up after missing out due to suspension against Madrid, although City are likely to remain relatively unchanged following their string of outstanding results across all competitions ahead of the tie at Elland Road.

With both teams keen on maintaining their excellent run of form, Saturday’s encounter is likely to make for a compelling watch. A relentless string of statement performances has seen the visitors annihilate their opponents in recent weeks, while on the other hand, a palpable improvement has seen Leeds remain hopeful of increasingly their league standing at the end of the season.

A calculative yet effective approach has seen Leeds remain energetic yet defensively solid since the appointment of the new manager. Having successfully employed a tactical philosophy distinct from the previous management, Marsch’s side have emerged amongst the most tenacious teams in recent weeks. An inverted role for Raphinha could see him target City’s left-flank whilst the pace of both Daniel James and Jack Harrison could provide the breakthrough for Leeds during counter-attacks on Saturday. Moreover, having been working on their decisions making and overall ability in possession, the hosts will be hopeful in delivering yet another tenacious display against City at Elland Road.

On the other hand, having four wins and a loss despite registering only two clean sheets in their last five outings across all competitions, City will be keen on dominating the opposition on Saturday. Facing a side who conceded seven goals in their previous league meeting, Guardiola will be looking to avoid any hiccups and secure maximum points at Elland Road. With Gabriel Jesus having delivered pivotal contributions in recent outings, the Brazilian is likely to pose problems for the hosts’ defence, while the likes of Kevin De Bruyne, Phil Foden, and Bernardo Silva will be expected to contribute to the team’s approach on Saturday.

Having started his first game since returning from injury against Palace last weekend, Phillips is expected to play a pivotal role if Leeds are to improve their league standing over the coming weeks. With the ability to spray passes across the pitch alongside remaining resolute in his defensive duties, the midfielder’s contributions will be vital if the hosts are to secure a result on Saturday.

Having delivered notable performances in recent outings, Jesus seems is likely to play a vital role in the club’s quest for a double over the remainder of the season. The Brazilian’s finishing combined with his desire has proven to be a crucial asset of Guardiola, with the Spaniard expected to further utilise his attributes amidst strong links of a potential transfer in the summer. Nevertheless, likely to register his name on the scoresheet, the Brazilian will be keen on contributing to the team’s prospects over the remaining fixtures.