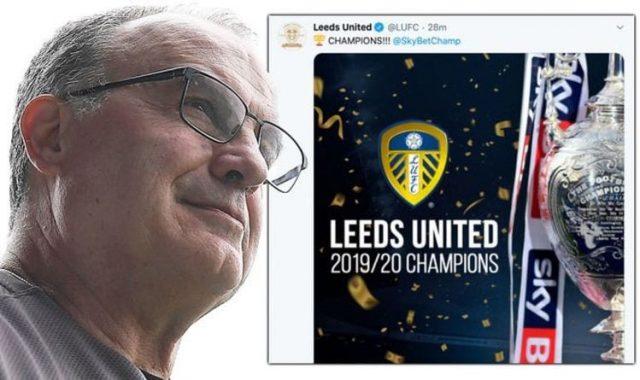 Leeds United have been declared Sky Bet Championship winners with two games left to be played for the Peacocks.

Their coronation comes following Brentford’s loss to Stoke City on Saturday with a narrow margin. The title also becomes Leeds first silverware after 28 years without a trophy.

Marcelo Bieslsa’s side on Friday booked their return to the Premier League after their 16-years exile in the top-flight as Huddersfield Town defeated West Bromwich Albion, but have now sealed their status as champions of the second tier of English football.

The Baggies’ game saw fans of Leeds celebrate wildly at Elland Road and the party is set to continue when they play Derby County on Sunday for their penultimate game of the 2019/20 campaign.

The triumph means that the Yorkshire side will attend to the trophy cabinet for just the first since winning the 1991/92 season when they won the top-flight title and the Charity Shield.

Sadly for the club, their winning moment have come after losing three of their great player; Norman Hunter, Jack Charlton and Trevor Cherry.

“A word about Norman Hunter and Jack Charlton, two club legends we lost recently and who would have certainly celebrated this achievement with us,” owner Andrea Radrizzani said.

“They are part of a great legacy that we will work hard to honour, as we continue to take strides forward in a new cycle for this fantastic club.”

Radrizzani became the sole owner of the club three years ago and was convinced together with the director of football Victor Orta to pursue Bielsa as their manager after struggling under Thomas Christiansen and Paul Heckingbottom.

The Argentine has now succeeded in securing Premier League football after only managing a play-offs position last season.

“I am so happy for everyone in the Leeds United family, we all deserve this promotion,” he added. “Leeds United is one of England’s greatest and most well-supported clubs with a rich history known all over the world.

“We have been out of the top flight for 16 years and I am thrilled for the whole club and our incredible fans that we are back in the Premier League.

“I would like to congratulate our fantastic manager, Marcelo Bielsa, the entire coaching and backroom staff, and of course all of the players who have performed outstandingly throughout the season.

“Since my journey with Leeds United began in the summer of 2017, we have strived for this moment and it is a time for us all to celebrate the club returning to where we belong. This is truly an amazing achievement and I’m so proud to be part of this club’s success.”