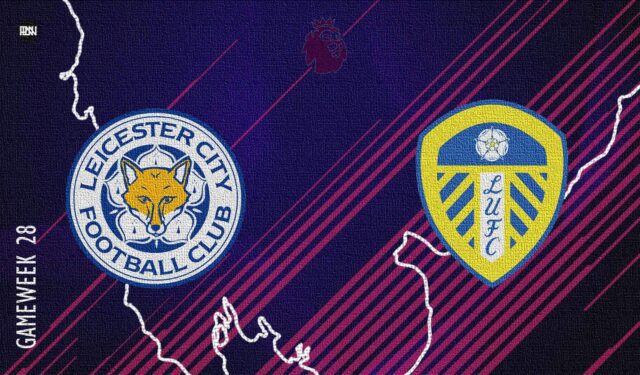 Jesse Marsch’s debut in English football comes at the King Power Stadium where Leicester City welcome Leeds United on matchday 28. Both the teams have struggled this season with main players being out with injuries for the majority of the season. The Foxes come into the game in good spirits after Jamie Vardy returned from his injury and scored in an impressive 2-0 win vs Burnley. Leeds United on the other hand are travelling to the East Midlands on the back of a 4-0 drubbing at home against Tottenham Hotspur which was Marcelo Bielsa’s final game in charge.

The hosts will be without a number of key players including Timothy Castagne, Johnny Evans, Ricardo Pereira, Ryan Bertrand and Wesley Fofana. James Justin is a doubt for the game and Jamie Vardy returns to the squad after his 18-minute cameo against Burnley.

For Leeds United, the return of Patrick Bamford to first-team training will be a huge boost for Jesse Marsch. Kalvin Phillips and Liam Cooper have been ruled out for the game.

Jesse Marsch implements a similar tactical setup as Ralf Rangnick at Manchester United using gegenpressing to regain possession and play a fast direct style of football. This is similar to what Marcelo Bielsa used during his tenure while attacking but in the defensive phase, the midfield and defence are expected to be compact and not leave spaces in midfield which was the loophole in Bielsa’s ‘murder ball’ style of play. Leeds have conceded 20 goals in their last 5 games which is something Marsch will be looking to fix immediately to avoid dropping points in winnable games like the one against the Foxes.

Leicester City meanwhile also face huge issues in their defence which is not conceding goals but having fit fullbacks! Brendan Rodgers will only have Luke Thomas fit for his fullback spots and faces a selection headache ahead of the early kickoff on Saturday. Leeds United can take advantage of the Foxes’ defensive woes by constantly looking to find Raphinha and Harrison on the wings. Raphinha the Brazilian playmaker has been pivotal for the struggling Leeds side having contributed to 40% of their goals this season and will be looking to do the same to impress his new manager.

The English striker will be looking to continue his fine form after returning from a long term injury against a defensively vulnerable Leeds side. He has scored 10 goals and provided 2 assists this season in 15 matches which is quite some form having overperformed his xG of 5.94. The Sheffield born striker passed Jimmy Floyd Hasselbaink in the all tie highest goalscorers with 128 goals and became the 14th highest goalscorer in PL history.

The Brazilian has 9 goals and 2 assists in 23 appearances this season and he will be given the responsibility of breaking down the Foxes’ defence. His playmaking skills and ability to pick the right pass will be key to Leeds’ attack. Jesse Marsche’s 4-2-2-2/4-4-2 setup will suit Raphinha’s style of play with the winger looking to cut inside and look to switch the play to the other flank.