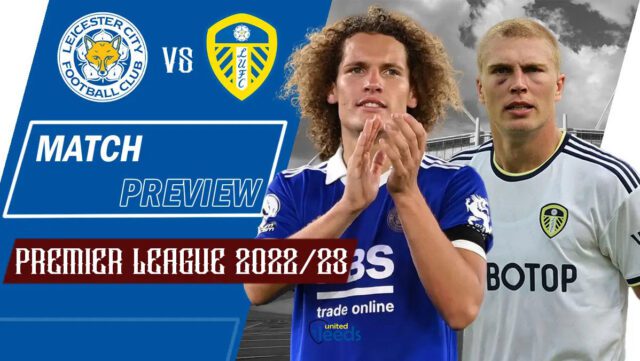 Leicester City hosts Leeds United tonight at the King Power Stadium. Both clubs are having rough seasons in the Premier League. The Whites are trying to avoid losing their eighth straight game while the Foxes have only won once all season. In the wake of last weekend’s goalless home draw against Crystal Palace, pressure on Leicester manager Brendan Rodgers has only increased.

While the one point they were able to get lifted them off the bottom of the league, the Foxes are still four points away from security and can ill-afford any more setbacks if they are to avoid relegation. Rodgers has watched his team win just one of their 10 Premier League games this season, and they have surrendered a league-high 24 goals. He stormed out from a media conference this weekend after a “very rude” question regarding his wages. The Foxes, on the other hand, have won their previous two home games without allowing a goal, including a 4-0 rout of bottom side Nottingham Forest, and they also held Leeds scoreless on their lone visit to the King Power in March, when they won 1-0.

Since Leeds’ promotion to the Premier League two years ago, Leicester has won seven of a possible 12 points against them. They will be hoping to win another three on Thursday. Leeds started out the 2022-23 season well by winning all three of their league games. However, the team has since struggled, earning only two points in their past six games. Although head coach Jesse Marsch was pleased by his team’s effort, the Whites were defeated 1-0 by league leaders Arsenal at home last weekend. Patrick Bamford missed a penalty in the second half of the game. The Whites have now gone six games without a victory.

Leeds are one point above the Premier League relegation zone despite being 15th in the standings and having a game in hand on the five clubs directly below them. They have a good chance to turn things around in the coming weeks, as four of their next five games are against clubs now ranked 10th or below in the standings.

Leeds have done pretty well at Elland Road, with their only defeat coming against Arsenal last weekend. On the road, however, the Whites have struggled, picking up just one away point out of a possible 12 and losing each of their previous three games outside of West Yorkshire.

While the 3-1 win at the King Power in January 2021 will live long in the memory of Leeds fans, a loss on Thursday may put the club in the bottom three along with Leicester.

James Maddison, a vital playmaker for Leicester, will be unavailable due to suspension after receiving his fifth booking of the season in the draw with Crystal Palace.

Wilfred Ndidi (thigh), Ricardo Pereira (Achilles), and Ryan Bertrand (knee) are all out for the Foxes, while Jonny Evans (tight calf) is questionable and will be evaluated before start.

Harvey Barnes will be depended upon to offer a stronger goal threat on the left wing in Maddison’s absence. The Englishman has found success against Leeds in the past, scoring in each of his previous five games against the club. Marc Albrighton or Ayoze Perez are other potential starters.

Stuart Dallas (leg), Adam Forshaw (ankle), Archie Gray (toe), and Leo Hjelde (foot) all out for the visitors (appendectomy). Junior Firpo will compete with Pascal Struijk for the starting left-back position after making his recovery from a knee injury last weekend. As Marsch continues to minimise Bamford’s minutes due to fitness concerns, the striker saw action in the second half against Arsenal but might start on Thursday if Rodrigo is benched.

Both Leeds and Leicester have endured difficult starts to the season, and the match-up between the two might just be a tense and narrow affair. Neither of the two teams will try anything out of the ordinary and will stick to their guns and play their own game.

Brendan Rodgers has shown versatility in his approach to coaching Leicester City, having used a 4-4-1-1 structure at Liverpool and a 4-2-3-1 method of play at Leicester City, with a 4-1-4-1 formation as a favoured option.

The aggressive style of play that Brendan Rodgers implemented with the 4-2-3-1 configuration has paid huge dividends for Leicester. His outstanding plan has shown his tactical mettle for the benefit of Leicester City, and he has had success with numerous teams.

The high number of players in the middle of the field suggests a possession-based style that uses a double pivot of two holding midfielders to shore up the back line. It’s built around fast attackers, and an attacking trio of Daka, Barnes and Dewsbury-Hall can undoubtedly wreak havoc

Jesse Marsch’s pressing strategies will be an integral aspect of his match and will encourage Leeds to press aggressively, advance the ball quickly, and press in large groups. He will have his two wingers/midfielders stay up top as an additional attacking line rather than retreat towards the middle.

Possession will not be a vital part of his offensive strategy, and as stated with Leicester keen on dominating the ball, this will be definite in the game, however his team might show better focus and intensity.

Leeds will have a tight formation that will allow them to attack through the middle of the field. And Marsch will encourage his team to crowd the area around the ball, but only to the extent that the passing lanes are kept open for long enough to throw off the other team’s rhythm and open up space.

Simply put, Tielemans has a flair for sniffing out players. A technically proficient and astute playmaker, Tielemans is a welcome addition to any team. Because of his ability to make the most of available areas, he consistently moves the ball forward and is seen as a key contributor. Through a combination of passing and carrying, he has improved his skills with the ball. Both his ambidexterity and his output are tied to how well he can control the ball. He is able to put into practise his concepts of passing and attacking because of his awareness of the pressure he is under and his ability to maintain his composure under pressure. He has a keen sense of sight and can see his colleagues in locations where no one else would bother to look. Being in a Leicester side, known for keeping the ball, Tielemans is someone who fits the bill.

Barnes works hard and accomplishes his goals in a productive Leicester team. He is mostly right-footed, like to cut in from the left flank whenever possible when in control of the ball. Leicester’s left defender keeps the team’s width consistent, allowing him to advance into more dangerous offensive situations with the ball. When in possession, Barnes makes excellent use of the ball because he consistently makes forward progress.

Barnes comes out as forceful and unafraid, easily slicing through the gaps between the other team’s players. Barnes takes the vast majority of his shots from within the 18-yard box or to the left of the centre of the box, which is consistent with his predicted goal production. Barnes’s goals come from all over the field and have been made on a variety of tough opportunities. Barnes’ results have been above par despite the fact that he shoots from perfectly fair positions, the vast majority of the time with his preferred right foot after cutting in. His qualities will help Leicester beat Leeds’ high press allowing him to be through on goal in any possible counterattack.

Illan Meslier is currently one of the best young goalkeepers in the Premier League and is showing it on a consistent basis. His lack of clean sheets is attributed to Leeds’ weak defence and not to Meslier’s ability. The goalkeeper in fact has a great future in the French national team. Facing a team like Leicester who will play on the front food, Meslier will have to be at his absolute best. His playstyle suits Leeds perfectly and in addition to his obviously great shot stopping skill, Meslier’s versatility as an auxiliary defender gives Leeds more flexibility when building plays out from the back in light of their high defensive line and aggregate press. Meslier loves to distribute the ball in short, buildup passes rather than lengthy, static ones.

Harrison’s versatility in his crossing is one of his biggest skills. In addition to his ability to loft the ball towards aerial targets and frequently beyond the opposition goalkeeper, he is also capable of hitting low, driven attempts across the penalty area and closer to goal.

Jack Harrison can outpace defenders with a combination of speed, jinks, and more permanent direction changes, and he can also make efficient forward runs and explosive off-the-ball actions that send him past defenders and into a position to receive on the move and keep his composure to cross. The fact that he can succeed by making use of both feet simultaneously is an additional strength.

As could be anticipated of a player developed by Bielsa, Harrison is capable of pressing with ferocity and speed while defending, and he often succeeds in doing so rather than seeking to immediately take possession of the ball. Therefore, it is not surprising that he picks up a disproportionate number of loose balls compared to interceptions and tackles. He will prove to be a difference maker in the game delivering crosses for Bamford and helping to break any counterattack