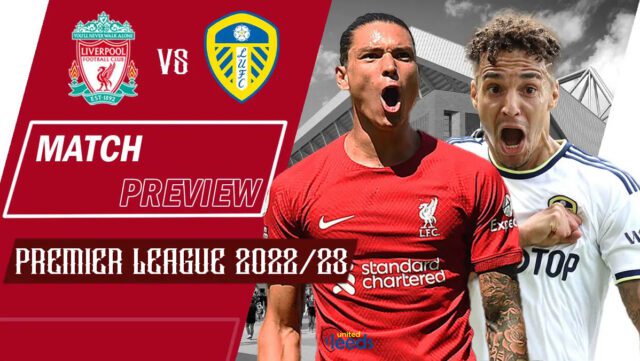 Liverpool go head to head against Leeds United at Anfield tonight, in what seems to be a crucial fixture for both the sides for different reasons. The Reds were showing signs of regaining their momentum in the league after beating Man City and West Ham only to lose all three points at City Ground last week. Leeds on the other hand have worsened their losing streak, losing their fifth match in a row with the home defeat against Fulham.

Klopp’s men will walk out through the tunnel on Saturday evening with the confidence boost from the win against Ajax in midweek, which secured them a pass into the UCL knockout rounds. But the Reds’ inconsistencies this season have been such that no result is a good enough guarantee for the next game in hand. Liverpool will however try to look at the Nottingham game as a minor deviation in the potential win-pattern they kicked off against the champions earlier this month. According to the manager, the game against Forest wasn’t their best performance, nevertheless they should have won with the kind of chances they got.

Jesse Marsch would know all about what the German was speaking, as Leeds United are one team who even in Klopp’s opinion has secured way less points for the performances they have put up. The American didn’t hold back when he told in the press meeting that he was tired of losing and he has never lost this much in his career as both a player and coach. Although the board is supportive and confident in the gaffer to turn things around at the moment, he himself admitted that he will be putting them in a tough position if the team can’t find a way to win. The young manager also stressed the importance of putting together a group of players who can perform under pressure on a high level, which might be an indication of under par performances from some, although he took the blame of the team’s current predicament on himself.

The home side has had an injury ravished spell so far this season, which hasn’t helped their already troubled start to the season. Henderson, who picked up a knock against Ajax midweek, is in doubt for Saturday eve. Thiago Alcantara, who was suffering from an ear infection, is good to go and will be available. So, in the event of the skipper being absent, the midfield will probably line up with Fabinho and Thiago in a 4-2-3-1 formation or Milner, Carvalho or Curtis Jones would line up along with the duo in a 4-3-3 style.

Harvey Elliott, Salah and Firmino are likely to take the field with Nunez upfront. If Klopp lines up with a 3 at the front formation, Nunez will be set to come from the bench, as he is coming back from a hamstring injury that saw him off the list against Forest.

The back four will probably remain the same as that secured a clean sheet in the Johan Cruijff Arena. Konate is back from injury and is available for the game, but might not start to avoid further concerns of a comeback too early.

The other injury concerns are Joel Matip, who is in rehab, and Naby Keita, who has started training but won’t be available for Saturday. Jota and Diaz are out for long term and so is the loan signing Arthur Melo, whose contract Klopp assured won’t be cut in January.

The Whites are another team with a whole array of injury concerns of their own. According to Jesse Marsch’s latest statement Rodrigo, Sinisterra, Liam Cooper, Joe Gelhardt and Tyler Adams are injured. However, the situation is being assessed and at least most of them might be available for the game since none of the concerns are serious.

The backline would probably line up without the skipper, with Llorente taking his place along with Koch, Struijk and either Ayling or Kristensen. Ayling who started the Fulham game might make way for the Danish youngster, as the gaffer has made his intentions of a heavy pressing game already clear. The centre midfield is likely to feature Sam Greenwood again, along with Roca as the fitness of Tyler Adams is in question. Klich is also a contender for Adam’s spot as he came from the bench in the loss against Fulham last week.

In the attacking mid, the availability of Sinisterra is in doubt and is likely to be filled up by Summerville who got on the scoresheet last game. He will partner up with the regulars Harrison and Aaronson. In the absence of Rodrigo, Bamford is left without a contender for the spot upfront and is more than likely to start at Anfield.

Regarding the long-term injuries, Stuart Dallas and Adam Forshaw are still out. Leo Fuhr Hjelde too is out as he requires more time to come back to full fitness after his appendectomy.