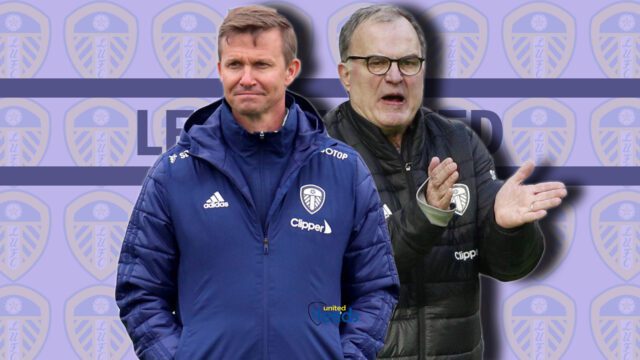 Marcelo Bielsa, the Argentine talisman, who had guided Leeds United to a Premier League return in 2020 after 16 years, was sacked following a very poor start to their season. Despite getting two late wins in their last two matches, Jesse Marsch faced a daunting task to avoid relegation as Leeds sit in 16th place with 8 games to go. But is Marcelo Bielsa to blame for Leeds’ terrible form in the league?

In the 2020-21 season, Leeds United had finished 9th as they gained a lot of supporters because of their attacking, entertaining style of play. Patrick Bamford, a 28-years-old Englishman was the top scorer with 17 goals. Starting 37 of the 38 matches, the Englishman also assisted 7 times as Leeds scored 62 goals in that season.

However, an ankle injury in September 2021, ruled Bamford out for a few weeks. On his return game in December, Bamford again injured himself and subsequently, another foot injury sidelined him for a few months as he returned on March 5 and has appeared in each of Jesse’s matches so far.

In the 2020-21 season, Bamford was involved in 24 goals (17 goals and 7 assists) for Leeds United in the league. He was involved in almost 28% of Leeds United’s goals this season. He also outperformed his xA (4) and had an impressive return with respect to his xG (19). Bamford also created 9% of his team’s big chances. Leeds had 18 of their shots denied by the woodwork, Bamford was responsible for 23% of it. He also contributed to 25% of his team’s total shots in the league. An interesting fact is that Leeds only lost 3 matches in which Bamford had scored, which includes the 7 goals thriller with Liverpool in the 38th gameweek. But is it only the attacking output?

Leading from the Back

Bamford was also an integral part of the team’s style of play and his defensive duties were also appreciated. Bielsa’s Leeds was known for playing with high pressing- defending from the front, with intense pressing to win the ball back. According to football statistics site, fbref, Bamford attempts 18.9 pressings per 90 minutes, this impressive number puts him in the 89th percentile for the centre forwards in Europe’s top 5 leagues. The 6ft 1-inch striker from Grantham also has the required physicality to toy with opposition defence to create chaos in the final third. In his penalty box, Bamford had impressive returns, his dominating aerial presence helped him to thwart any opposition attack 29 times along with 37 clearances from his own box. His intelligent off the ball movement guides him to head the ball accurately. With 21 tackles and 17 blocked shots, many people would often think of him as a defensive midfielder.

Is it just Bamford?

Patrick Bamford was The Whites’ leading goal scorer undoubtedly, but was it just him firing goals left and right?

Raphinha, the Brazilian winger Leeds bought from Rennes in 2020 also had impressive numbers on the goal-scoring charts as he netted 7 times. He had a staggering return with his xA (9.3) as he assisted 9 times in the Premier League. Northern Irish fullback, Stuart Dallas staggeringly outperformed his xG (4) as he found his name 8 times on the score sheet. He was directly involved in 10 goals for his team, highlighting the importance of attacking fullbacks in Bielsa’s style of play. While in the current season he has only managed to score 1 goal and grab a solitary assist. Jack Harrison, on a loan from Manchester City, the attacking midfielder had an enormously successful season as he outperformed both his xA and xG as he finished the season 8 goals and 8 assists thus Leeds signing him on a permanent basis at the end of a season. Picking up from where he left off, Harrison has scored 5 times this season including a hattrick but only 1 assist has surely put him under scrutiny now.

Needless to say, Bamford’s absence has hurt Leeds United’s hopes the most, but to make things worse other injuries to first-team players gave Bielsa very little time to cope. Kalvin Phillips, Rice’s midfield partner at the Euros has been sidelined since December 5 following a hamstring pull. His dominating presence has surely disorchestrated the midfield in Bielsa’s setup. Luke Ayling, whose goal against Manchester United was nominated for Premier League’s goal of the month, was sidelined for three months because of a knee injury. Upon his return, he has failed to regain his lost mojo. With age being not on his side, it is interesting to see what are Jesse’s plans with the fullback. Dallas’ off form plus Ayling’s absence disrupted Leeds’ effective wing play.

Bamford was the Elland Road club’s leading marksman and his absence was evident that Leeds would go all out in the January transfer window to get themselves a striker, but to everyone’s surprise, they had a quiet transfer season as they did not sign any striker, not even a loan move. Rumours of Verdat Muqiri and Giovanni Simeone also died down as the window progressed. Replicating Bamford’s presence not just as a forward but also as a team player was not an easy task for The Whites.

Barring Raphinha, no one has managed to hit the double marks in goal involvements. Summer transfer signing Daniel James, the makeshift winger from Manchester United was touted to be the best choice for Bielsa’s system and the Welsh man has scored 4 goals and grabbed 3 assists in 26 league games. Several players played as the centre forward throughout the league, Raphinha, Rodrigo, Harrison, James. Youngsters like Gelhardt, Sam Greenwood also were also tried to lead the attack but none could match the ex boro man, Patrick Bamford, whose magnificent attacking prowess guided Leeds United to score staggering 62 goals, more than the European champions, Chelsea as Bielsa’s brand of attacking, high-intensity football entertained fans with thrilling matches and moments. But all this ecstasy was short-lived as Leeds have managed to score just 34 goals this season, 1.13 goals per 90 minutes as compared to last season’s 1.63.