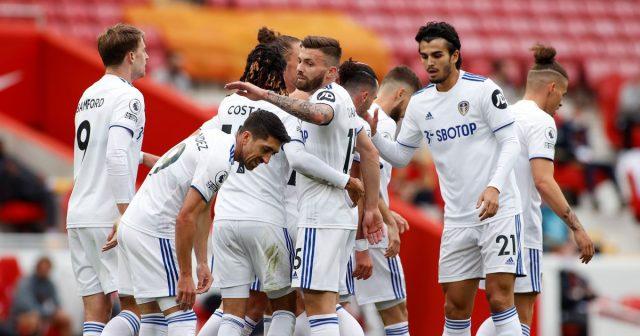 The Premier League is back and we are already being treated to exciting matches, especially in the game involving Liverpool and Leeds United, which ended in the favour of the home team.

Leeds United are truly back and here to stay, with the performance they gave in the defeat against Liverpool. The players gave their best throughout the game and were not overawed by Liverpool and the step up from Championship to the Premier League.

The team gave Liverpool and Jurgen Klopp a good fight, and a run for their money. It was a match that involved two master tacticians running its affairs from the sidelines.

Though, Liverpool eventually won the match with Mo Salah scoring the first hatrick of the new season, Leeds fans are happy with the performance of the boys. They disturbed Liverpool from playing their free flowing and high pressing football.

Leeds style of play caused the Liverpool’s defense problems, resulting to mistakes that led to goals from dependable defenders in Virgil Van Dijk and Trent Alexander-Arnold.

Speaking to Match of the Day after the game, Van Dijk has nothing but praise for Leeds United. He admitted that the team will cause problems for a lot of teams this season, and that they are here to stay in the Premier League. He said, “Leeds are going to cause a lot of teams problems because of the way they play. Credit to them.”

Klopp, also has nothing but praise for the team and he predicted that they will remain in the Premier League is they can keep their intensity. In his post match interview, he opined that, “Leeds will have a good season if they can keep up that intensity and they did it in the Championship with more games so why not?”

One match down, thirty seven more matches to go to prove that they are truly back and here to stay.