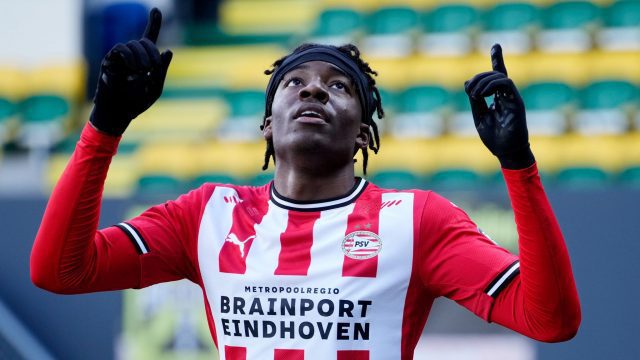 Chukwunonso “Noni” Tristan Madueke is an English football player who is currently playing for PSV Eindhoven in the Eredivisie. Noni Madueke plays as an attacking midfielder for the club and has recorded 7 goals and 4 assists in 20 games for the club.

Madueke actually began his footballing career at Tottenham Hotspur and even went on to make his U-18 debut with them at just the age of 15. He moved to PSV in 2018 and even rejected an offer from Manchester United in the process.

At just 19 years of age, he still has a big way to go in his career, and one can surely understand that he is slowly coming to the age where he may want to go to a bigger club or league to prove himself.

At such a tender age, he possesses great composure and dribbling skills, which can help open up a place for his fellow players. He can also strike the ball with some venom from outside the box, and that is always a great trait for any attacking player. His nimble footing and ability to thread a pass on required occasions just go to show the talent that he has.

Noni Madueke game is pretty similar to that of the likes of a few of the England youngsters, and thus, one can understand why he is dubbed as the ‘next Phil Foden.’

Leeds United is showing a lot of interest in securing the services of the talented youngster, but they are not alone as Bayern Munich and Crystal Palace are not very far behind in the race.

A young and impressionable player like him can learn a lot from a tactical genius like Marcelo Bielsa, who has taken the Premier League by storm as he is crafting a young and exciting team.