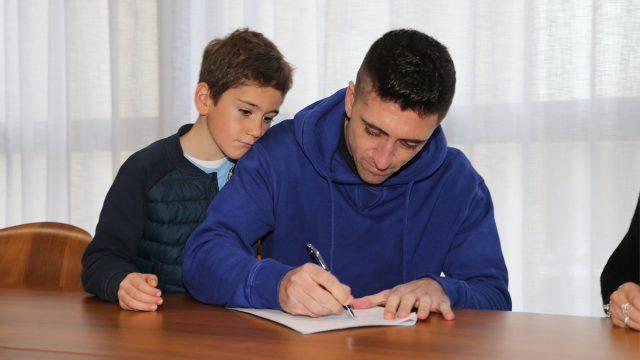 Leeds veteran winger Pablo Hernandez has signed a new two-year contract at Elland Road which will see him stay at the club till the summer of 2022.

Leeds sit 3rd in the Championship table just 1 point adrift of the 2nd position and 2 points behind the league leaders West Bromwich Albion.

Since arriving at the club in August 2016 (initially on loan from Al-Arabi), Pablo impressed immediately and was signed permanently the following January.

Hernandez has been named Leeds’ Player of the Year in each of the last 2 seasons. In the 2018-2019 season, Hernandez scored 12 goals and provided 12 assists after nearly missing out on promotion to the Premier League as they were knocked out from the playoffs.

💬 “It’s an honour for me to stay at this club” Hear more from Pablo after the #LUFC playmaker penned a two year contract extension pic.twitter.com/KXm4NVcmA4

This season Hernandez has already started on the front foot scoring 2 goals and laying off couple of assists in opening ten fixtures for Leeds though has not started since September because of injury.

This is indeed good news for the fans as the club prepares to once again return to the Premier League after a strong start to the 2019-20 season.

Leeds director of football Victor Orta, while in converstion with Leeds official website, expressed his delight at Pablo’s extending his stay with the Whites.

💬 “We want to improve and achieve our target” Read more from Pablo as he chats about his new deal, his aims this season, and working with Marcelo

Orta on Pablo Hernandez extending his contracct with Leeds, said: “I think Pablo is one of the best players I have worked with in my career.

“He has an amazing ability to change a game, he gets goals and assists in equal measure and he is someone that the rest of the squad can look up to.

“I’ve worked with talented players in the past, but you have to consider Pablo’s attitude and work ethic as well as his ability and I firmly believe the history books will show Pablo to be a true Leeds legend in years to come.”

Leeds have now rewarded seven players with new contracts since start of this campaign and Orta believes Leeds keeping hold of his contryman is a major coup for the club.

“Pablo had options in the summer, we had offers from clubs in England and teams overseas – but he believes in this project and knows he can play a huge part in the next two years.

“Again we have to thank the chairman for backing us to give players new deals and we have to acknowledge that all of those given new contracts have significantly improved under our head coach.”

🧙 The Pablo Hernandez Appreciation Post 😍 How would you describe the Spanish Wizard? pic.twitter.com/tRwnRtc4Ij