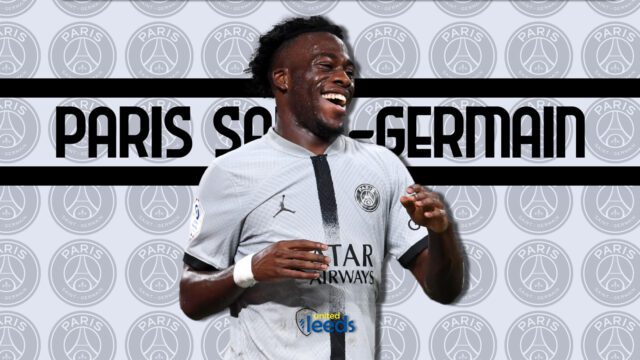 According to MediaFoot, Leeds United have submitted a £20 million bid to sign PSG’s highly rated striker Arnaud Kalimuendo this summer. Luis Campos, PSG’s head of transfers and advisor, is open to selling the French striker in order to reinvest the sale money in the Milan Skriniar deal which is stalling at the moment. Inter Milan are demanding €70 million to let the Slovakian leave and PSG are not willing to meet the Italian club’s demands.

Luis Campos is a shrewd director who always wants to save as much money as possible while recruiting and finding the best possible players from his scouting network.

Leeds United have sold first-team duo Kalvin Phillips and Raphinha for a combined fee of around £100 million and have reinvested the money into the squad by signing 7 players. Jesse Marsch has been backed heavily and the American is looking to sign a center-forward as the last signing of this transfer window.

Kalimuendo is a center-forward who began his career at PSG’s academy and has been phenomenal throughout his youth career.  He made his debut for the PSG U-19 side coached by Thiago Motta as a 16-year-old.

His debut for the first team came in September 2020 after which he was loaned to RC Lens where he had his breakthrough. The 20-year-old scored 12 goals last year for the French outfit in Ligue 1 and was also involved in 47 shot-creating actions.

Patrick Bamford has had a stop-start career at Leeds and was injured for the majority of last season. The English striker has scored 45 goals in 119 games for the Peacocks and the club could be looking at the long-term future under Jesse Marsch.

Charles De Katalaere was a player admired by Marsch but AC Milan look likely to sign the Belgian striker with negotiations at an advanced stage.

Leeds’ alternative to Charles De Katalaere is Kalimuendo which is why the Peacocks are interested in signing the highly talented forward. The French striker has the potential to be one of the best and under Marsch he could develop into one of those players playing in the best league in the world.

Will PSG sell him?

Christophe Galtier, the new PSG manager, and Luis Campos seem to have contradicting opinions about the player.

Galtier wants Kalimuendo to stay despite signing Hugo Ektike from Reims this window to provide backup to Kylian Mbappe for next season. Ektike’s arrival means Kalimuendo will have to be the third choice forward at the club.

While Campos is willing to cash in on the youngster so that the striker gets regular game time at another club.

What could Kalimuendo bring to Leeds?

Kalimuendo is a lethal finisher and proved it during his loan spell at Lens last season where he averaged a goal every 2.5 shots. He isn’t the tallest of strikers like Patrick Bamford but uses his low center of gravity to dribble past defenders with pace and acceleration.

The 20-year-old has a very active presence in the final third and is very involved in his side’s build-up play. He completed 82.6% of his passes and received 9.48 passes per 90.

Leeds’ would have a more dynamic presence with Kalimuendo in the side which will allow Marsch to even play the Frenchman on the wings occasionally against teams that use a high defensive line.

A youthful trio of Sinisterra, Kalimuendo, and Aaronson would certainly excite the Leeds’ faithful under the leadership of Jesse Marsch.

The €20 million price tag seems very reasonable and is half the price Leeds were going to pay for De Katalaere before AC Milan hijacked the deal.

According to reports, three English clubs include Leeds United, Everton, and Newcastle United are interested in signing Kalimuendo. It remains to be seen whether the dispute between Campos and Galtier comes to a fruitful conclusion and the future of the French striker is resolved quickly.

READ MORE: FPL 2022/23 Price Reveals: Whom should you target amongst Leeds United’s assets?