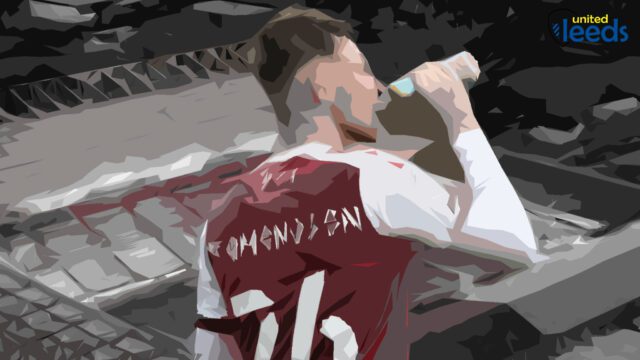 With no wins in their last 5 matches, Jesse Marsch’s Leeds United are on the sinking ship of relegation. Needless to say with The Whites packing their bags to travel to the 2nd division of English football they have a lot to address this season. From the sacking of Marcelo Bielsa to the star players losing their mojo, Elland Road has seen it all this season. Marsch must need to find the elephant in the room and look for major overhauling in the areas required.

Besides this, the American will also have to go through and assess all of Leeds United’s loanees in search of potential breakthroughs to the first team. While he might have to scratch his head regarding a few of the talents, it is almost evident that Ryan Edmondson’s time at Elland Road is coming to an end.

Currently, at Port Vale, Ryan Edmondson has been struggling all season. The 20-year-old has already had quite a number of loan spells away from his parent club. After disappointing spells at Aberdeen and Northampton; Edmondson was loaned out again to Fleetwood Town in 2021. Initially, he struggled to make it regularly into the playing 11. During his loan tenure, he only managed to start 4 matches out of 11 but failed to score nor assist in any of the matches.

A disastrous performance saw his loan spell cut short as he was shipped to League Two club, Port Vale in January 2022. Still not a regular at his new club, Ryan has at least better his record while playing for Port Vale. In 19 matches as of now, he has scored 3 goals while also assisting another. His best goalscoring record since his tenure at the Scottish Club, Aberdeen. Despite his earlier season troubles, Edmondson appears to have found his level in League Two, and he possesses all of the physical attributes required to be a success there. He averages an abysmal 0.19 goals per 90, a record that isn’t generally welcomed by any Premier League club.

With the likes of Joe Gelhardt and Sam Greenwood rising the ranks with Leeds also being linked to a few players this summer, it is possibly going to be either another loan move for the Harrogate-born footballer or a permanent one with a keen eye on some continuity for his development. Let’s not forget, that Edmondson is still 20 years of age so there is still room for his development but regular loan spells at different clubs in different clubs will surely hamper his growth and development.