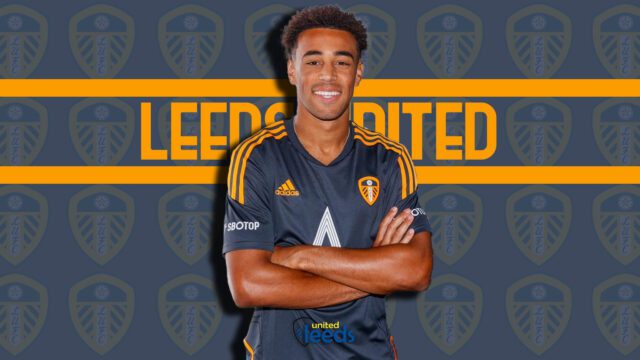 IT’S OFFICIAL! Leeds United have completed the signing of American star, Tyler Adams, from the German outfit RB Leipzig for a fee of £20m (including add-ons).

It is being reported that the new Leeds signing will play a successor to Kalvin Phillips, following the latter’s move to Manchester City. But, the question at hand is – “WHO IS TYLER ADAMS?”

Well, to begin with, he is a star! A 23-year-old American-born midfielder, showing his paces here in European football. It is a lot already, considering there are no long-lasting traditions of football or “soccer”- as they like to call it there in America. So for players like Dest, Pulisic, Adams, etc., to play at such a level so far away from home, is not easy.

And Tyler Adams had to go through all of it! He had his goal set from the start, that he would want to represent his country’s Men’s National Football (“soccer”) Team. Adams started early, actually, he was 11 when he got himself enrolled in the New York Red Bulls’ academy. He was part of the academy for another 5 years before getting officially contract bound to the New York Red Bulls II, in 2015.

There, Adams played a total of 33 games and got a hell lot of attention and recognition- and it was enough for a call-up in the Senior squad of the NYRB. And the time finally came, when he signed his senior contract for the NYRB (New York Red Bulls) at just 17 years of age. It was about to get all uphill from thereon, and the boy showed that he was just getting started.

THE FIRST NATIONAL TEAM CALL UP

Throughout, Tyler Adams had been called up for the U17-USMNT side and the U20-USMNT side. It was as if, the New York-born youngster was writing his name on the side first up. But, like all the players, it was his dream to play in the senior national team. Who doesn’t dream of something like that?!

And it was in 2017, at just 18 years, Tyler Adams got his first call-up for the USMNT. It was obviously a proud moment for the young midfielder, but also it was expected to see his rise at the New York Red Bulls. In the 3 years that he spent in the first team of NYRB, Adams was able to rack up 74 games- scoring 3 goals and assisting another 10.

And finally, in the winter transfer window of the 2018/19 season (in January 2019), he signed for his first European club. Yes! It was another Red Bulls-owned side in the German Bundesliga, RB Leipzig who signed the youngster for an initial fee of $3 million, with a sell-on clause. Looking back at that, now, it is fair to say that it was nothing compared to what he achieved with the RED BULLS.

101 appearances, 2 goals, and 4 assists, and most important of all is how he just made his way into the starting XI. From playing in the American “Soccer” League to shining at the European FOOTBALL- levels!

A REUNION WITH JESSE MARSCH: IS IT WORTH IT?

Now he has taken another big leap, as it is officially announced by the club itself that Tyler Adams has joined Leeds United, to play in the Premier League next season. For a backend context, some of you might not know that Adams has played under Jesse Marsch before, and it was both at NYRB and RB Leipzig!

Although, it was for a short spell of time, but now it seems as if Adams must have impressed Marsch so much so that he has gone in and asked his club to buy the youngster. But it could be worth it! Just hear me out…

Tyler Adams can operate as Central Midfielder, Defensive midfielder, and as a right-back as well. One thing is operating and another thing is really doing well, and trust me Adams is the one who produces the latter. And as an out-n-out replacement for Kalvin Phillips, he fits the bill. The Englishman played as a ‘creative’ Central Defensive Midfielder, with the eye of filling in spaces in the middle of the park for Leeds. And to be honest, this is where Adams is highly influential- operating and covering the middle, with the knack for tracking back the opposition’s runs in behind the defence, and also providing efficiency on the counter.

This could be one of the “watch-out for” summer signings of the Premier League. Adams at Elland Road is an exciting prospect, especially under Jesse’s tutelage.