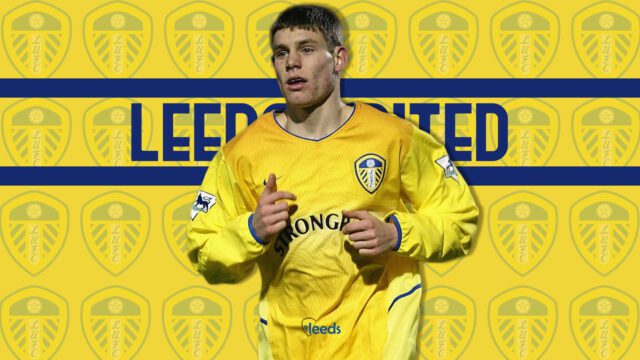 Leeds United has enjoyed top-flight success in recent years and although they are not one of the contenders, they have seemingly left their Championship days behind. This is attributed to great management and a host of talented players, including some sparkling youngsters.

Over the years, Elland Road has indeed seen some of the youngest Associate Football players in history, and Leeds have a superb list of players who started their careers as youngsters here and went on to flourish. In this article, we look at those players who defied the odds of bookmakers in the UK and entered professional football before they could even legally drive!

Check out our list of the seven youngest players to ever play for Leeds United!

Current Leeds manager Jesse Marsch would have loved to have a player like Aaron Lennon during his younger years. At the time of his Leeds debut in 2003, Lennon was the youngster player ever in the EPL and he was electric.

Lennon was known for his lightning pace and at just 5ft5, he could really shift and easily take on defenders. After a decent youth career and professional career with Leeds, Lennon went on to join Tottenham, where he flourished and had his best years. During his 10 years with the club, he made 266 appearances and won the League Cup with them in the 2007-08 season.

Together with Lennon, Milner is the most recognizable and successful young Leeds United player. Milner was a youth team prodigy and played for the youth squad from 1996-2002. After this, he went straight to the first squad and had 48 appearances for Leeds, with five goals.

His start at the club may have been short but it certainly laid the grounds for his long and prosperous career. Milner’s best stints have easily been with Manchester City and Liverpool, and he has won numerous team accolades, including three EPL trophies, two FA Cups and two League Cups.

Despite being one of the youngest Leeds players ever, at 17 years and 175 days, Boyle was relatively unknown and was only an apprentice, making just one appearance for the club from 1996-2002.

Most of his professional career was spent at the Northern Irish Premiership club Portadown F.C., where he made 200 appearances from 2002-2012. He was a defensive midfielder and only ever scored one goal during his entire career.

Maybury had a long professional career that spanned nearly 20 years. During that time, he played for Leeds United, Leicester and a range of Scottish teams.

He primarily played as a full-back and was a solid defender, enjoying his success in the Scottish leagues. During his time at Leeds, he was mainly a backup for Gary Kelly and spend various spells on loan to gain experience. He also played for the Republic of Ireland international squad and earned 10 caps for them.

Kewell is often regarded as one of the best Australian footballing talents of all time. His skills were apparent from a young age and he played for Leeds for eight seasons, from 1996.

Although his career was speckled with injuries, he enjoyed success at Leeds, Liverpool and Galatasaray. Moreover, Kewell was central to the Australian international squad and played in various competitions such as the 2002 World Cup and OFC Nations Cups. After retiring from playing, Kewell went on to manage various teams, including Watford and Notts County.

Bowman was one of the lesser-known youngsters at Leeds, but he still played in some important games and enjoyed a 10-year professional career with Leeds, Rotherham, Carlisle and the Bohemians in Ireland.

Rob started his career at Leeds at just over 17 years old and in 1993, he was part of the winning team that lifted the FA Youth Cup against Man U! The Red Devils team actually included notable players Gary Neville and Paul Scholes. Also, he played in the legendary game in which Jimmy Glass (the Carlisle goalkeeper) scored a goal in the 94th minute to keep them in the Football League.

Ian Harte is the last player on our list and another Irish international. He had an excellent career and indeed had his longest stint at Leeds United. Harte played for the Leeds United youth team and then went straight into the first squad at 18 years old in 1996.

He was well known for his excellent long-range striking abilities and was a free-kick specialist in his prime years. After making 288 appearances for Leeds, he had a short stint in Spain and then returned to English football and bounced around many teams, including a Championship-winning Reading in 2012. Harte also had success with the Republic of Ireland squad and played in the 2002 FIFA World Cup.

As you can see, there have been some incredibly young players start their careers at Leeds United and go on to greatness. Admittedly, there have also been some youngsters who didn’t fare so well, but players such as Aaron Lennon, James Milner and Harry Kewell were all amazing to watch and have enjoyed long and prolific careers.

Other notable players who were a little older but started at Elland Road include Alan Smith, Jamie Forrester, Noel Whelan and Jonathan Woodgate. Most of these players were 18 or older when they started at Leeds.