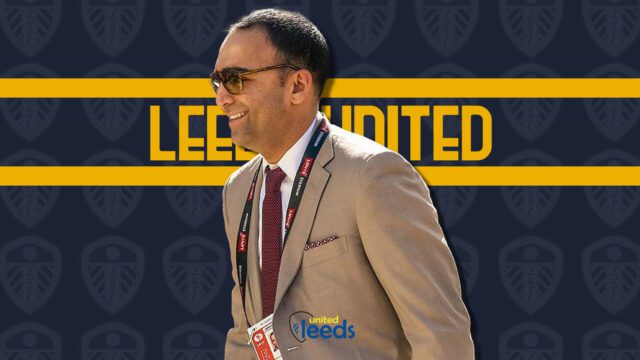 For more than a decade, American businesspeople and investors have been drawn to the Premier League’s glory and riches, as the football tournament has grown into a global brand that generates millions of dollars in income each year. As of now, American businessmen/companies own a minority or majority ownership in 9 of the 20 Premier League teams. Last year, American corporation 49ers Enterprise purchased a 44% share in Leeds United, decreasing the influence of Italian businessman Andrea Radrizzani, who purchased the club in 2017. The President of the 49ers, Paraag Marathe, was named a member of the senior management team with the Peacocks as the Vice-Chairman of the Leeds United board.

The vice-chairman recently spoke to BBC sports editor Dan Roan on The Sports Desk podcast about the 49ers’ vision with Leeds United, Elland Road plans and activating the hidden clause to complete a 100% takeover of the club in 2024.

On his role at Leeds United

“I sort of just take it one day at a time. I’m really enjoying the ride and the biggest thing on my mind is Crystal Palace. I can’t really think past that to be honest with you.

On future plans for Elland Road

“I’ll be honest with you, the main thing is to protect the magic and electricity that is in Elland Road,” he added. “The answer then is it’s probably a stadium expansion than a new stadium because I don’t want to take away that aura.

“Players from the other 19 clubs, if they’re going to list the three worst places that they want to play on the road, Elland Road is probably one, two or three for them. I don’t want to take that away.”

On how attractive the Premier League is for Americans

“Speaking for myself, this is the most popular sport in the world and one of the most popular leagues in the entire world. It’s such a cultural phenomenon, not just in the UK and Europe but around the world and it’s big business and big competition. I think a lot of us American sports owners and executives, we live for the competition, we live for the winning and losing of it and you see it in English football. The emotions, the jeopardy and the intensity are just almost magnified. It’s probably not good for any of our heart health. I know mine included, but it’s just fabulous, it’s fascinating, it’s energy.”

On criticism of American owners over the years

Here at the 49ers, we think about what we need to do to build ourselves a Super Bowl winner? What do we need to do to put ourselves in a position to win the Super Bowl? If you can do that, everything else follows. It’s the same thing here, even when you ask that question I don’t think about it in those terms. I’m thrilled to be a part of it, I’m thrilled to be involved and obviously I want us to build something that is financially sustainable but I want to win – that’s what it comes down to.”

There have been plenty of rumours about the 49ers buying the club for a whopping 475 million pounds which is 10 times more than what Radrizzani paid to purchase the club in 2017. According to the Athletic, the American company will not be able to purchase Leeds United if Andrea Radrizzani’s parent company Aser were to buy a club before the deadline which is January 2024. The deal also includes the sale of Elland Road which was purchased for 20 million pounds in 2017.

There could be a flurry of changes awaiting the Peacocks in the near future as the current majority owner Radrizzani is cash-strapped and hasn’t been convinced to keep the club financially stable over the next few years. It might be the right time to hand over the ownership reins to the Americans who look ambitious and have the necessary funds to run the club and take it to the next level closer to the top clubs in England while also keeping Elland Road as the cornerstone of the club to keep the footballing heritage of the club intact.