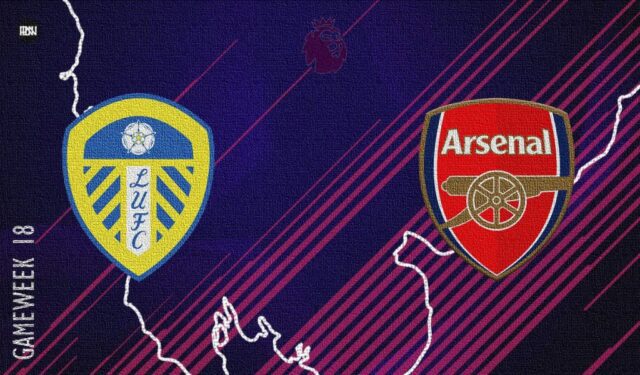 Leeds United host Arsenal at Elland Road amidst a weekend that could see several Premier League clubs request postponements in view of an increasing number of Covid-19 cases amongst the staff, players, and other personnel. Having suffered a humiliating 7-0 defeat to Manchester City in their previous outing, the hosts will be looking to bounce back on Saturday, while the visitors will be keen on maintaining their position in the table, heading into a favourable set of fixtures.

Standing just five points above the relegation zone amidst their struggles to find consistency, Leeds will be keen on moving up the table during the Christmas period. Having been impeded by injuries to key players throughout the ongoing campaign, Marcelo Bielsa’s side have failed to deliver convincing performances, but will remain keen on improving their results over the coming weeks. Facing an Arsenal side not boasting the best of results away from home this season, Leeds will be seeking to capitalize on their weakness in a bid to avoid a relegation battle anytime soon.

Having delivered impressive results in recent weeks, Arsenal will look to secure their fourth spot in the league table over the coming weeks. Following their remarkable display against Southampton, a disciplined mid-week performance against West Ham saw the Gunners keep consecutive clean sheets for only the third time this season. Although having won only two of their eight league games away from home in the ongoing campaign, Arsenal will be looking to improve their away record, given their need to remain strong contenders for European football next season.

Daniel James and Jamie Shackleton are the latest addition to Leeds’ growing list of injury concerns heading into a demanding period of fixtures. Junior Firpo will serve his one-game suspension this weekend, after the left-back picked up his fifth yellow card of the season against Manchester City, with Robin Koch the only expected returnee for the game against Arsenal after recovering from illness.

Bielsa is expected to remain without the services of up to eight first-team players with all of Patrick Bamford, Kalvin Phillips, Rodrigo, Liam Cooper, and Pascal Struijk out of contention for the weekend. However, with the team in desperate need of points, Bielsa is expected to field his strongest XI in hopes of, at least, securing a point against Arsenal on Saturday.

Pierre-Emerick Aubameyang is expected to remain out of contention for a consecutive game after the club found the striker guilty on grounds of indiscipline last weekend. Emile Smith Rowe could push for a spot in the starting lineup after Gabriel Martinelli is said to have picked up a knock during their mid-week clash against West Ham.

Sead Kolasinac and Bernd Leno remain sidelined with injuries, although players such as Albert Sambi-Lokonga, Nicolas Pepe, and Nuno Tavares could push for a place in the starting XI this weekend. However, with Mikel Arteta expected to prioritize the league game ahead of a mid-week Carabao Cup clash against Sunderland, the Spaniard is likely to field a familiar starting XI, thus, maintaining the team’s chemistry ahead of a crucial set of fixtures.

Having gradually built upon their sold foundation from the defensive line, Arsenal head as overwhelming favourites for a victory on Saturday. With both teams cherishing an expansive brand of football, the encounter between two coveted tacticians is likely to produce a palatable match-up for all viewers.

Given Leeds’ injury crisis across several positions on the pitch, Arsenal will be looking to capitalize on their inherent weaknesses. Having conceded seven goals in their previous outing, the home side are likely to adopt a comparatively balanced approach this weekend. Bielsa will be hoping to inspire an improved defensive performance whilst setting up to remain clinical around the opposition’s penalty box. With Leeds likely to retain their attacking approach despite an inexcusable outcome against City, the home side will be hoping to nullify Arsenal’s strength down the flanks and through central passing lanes, thus, remaining consistent in possession this weekend.

Arsenal, meanwhile, will be looking to dominate the home side across the pitch, while retaining the bulk of possession and preying on the weaknesses in personnel on Saturday. Given Leeds’ aggressive nature without possession, the visitors will be keen on exploiting half-spaces in the opposition’s half while making the best out of set-pieces and camping around the attacking third frequently. Further, the visitors will look to avoid and defensive hiccups and dominate the midfield throughout the ninety minutes. Given an important three points at stake, Arsenal will be hoping to leave Elland Road unscarred this weekend.

The team’s most impactful player this season, Raphinha will, once again, be relied upon to deliver a favourable result this weekend. The winger is Leeds’ highest goal-scorer (7) in the ongoing campaign, and his contribution will prove to be vital if the team are to witness an upturn in results over the Christmas period.

Raphinha’s creativity combined with his finishing will be vital to Leeds’ goal-scoring opportunities this weekend. Although the Gunners have displayed a string of disciplined defensive performances in recent weeks, the Brazilian is likely to cause problems if the visitors fail to contain his vision and trickery on Saturday. Provided Raphinha emerges as an enticing presence in the attacking third, Leeds could potentially secure a positive result against Arsenal.

Having displayed decent performances since returning to the starting line-up, Lacazette will be hoping to increase his goal contributions over the coming fixtures, starting this weekend. The striker’s finishing combined with his movement will be pivotal to Arsenal’s goal-scoring opportunities against Leeds on Saturday.

Further, the Frenchman’s fluidity across the final third could potentially contribute to disrupting Leeds’ defensive shape. Provided the Gunners create numerous chances throughout the ninety minutes, Lacazette is likely to be involved in contributing to, at least, a goal this weekend.