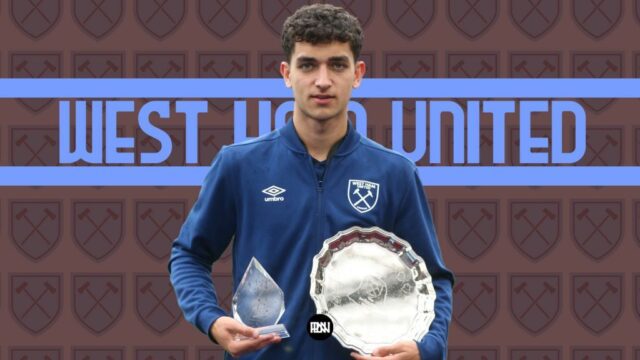 Leeds United are keen to make a move for West Ham under-23 sensation, Sonny Perkins in the transfer window.

Sonny Perkins’ performances at the academy level with West ham has left a few clubs in the Premier League quite impressed. One of them is the Elland Road club, who seems very interested in the player and are pushing to make a move for the young star.

Jesse Marsch, the manager of Leeds is in talks for the center-forward as his contract runs down with the club, and are interested to make his move possible over a free transfer this summer. With the transfer window officially commencing today, clubs will now have the green light to make any signings possible during this period and Leeds are one such club looking to strengthen their squad with the likes of Perkins.

Although the 18-year-old has not had too much exposure in the English top-flight, he has however been very good at the youth level. Prior to gaining promotion to the U-23 squad, he rose up the ranks in the youth setup and continued to shine for the club’s U-18 side.

In 21 appearances for the club in the youth league, he amassed 12 goals and added one assist after being used in a handful of different positions across the frontline. Primarily operating as a center-forward, the academy star adapted to playing on the wing and in the number 10 position relishing plenty of success.

With the inclusion of Perkins in the Leeds setup, considering his potential, the player could bring more quality to the U-23 squad. Also, training with the first team under Marsch could help him flourish as a winger on the flanks and as a center-forward as the youngster desires to play. Players like Joe Gelhardt and Sam Greenwood have made the step up to the first team and no surprise, Perkins could certainly look up to them for inspiration.

Creating an exhilarating impact in the U-23 squad, West Ham decided to give him minutes with the first team under David Moyes in the Europa League. Perkins was named the Premier League 2’s player of the month for April this season for his impactful performances on the pitch.

At such a young age, attaining the level of maturity on the pitch as projected by Perkins may not be everyone’s cup of tea, and PL clubs have taken notice of this. The interest by the Elland Road club seems justifiable and no wonder they are pushing hard for a move for the player.

Not to forget, there are a few other ‘sharks’ in the PL circling around the player to make a swoop for him with the likes of Aston Villa and Tottenham interested. While Marcelo Bielsa, Leeds’ former manager was the master of bringing academy players through and grooming them, it appears as though Jesse Marsch is keen to replicate and secure his services as swiftly as possible.