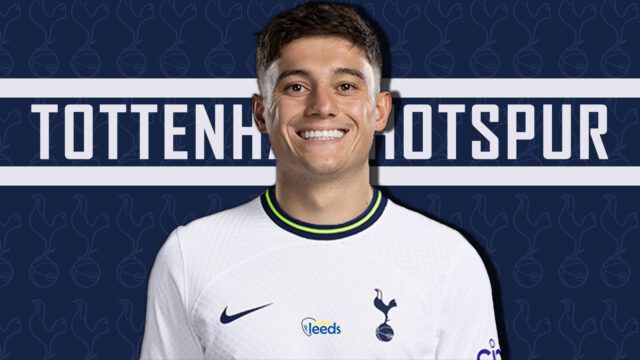 Tottenham Hotspur are considering a shock move for ex-Manchester United and current Leeds United winger Daniel James before the end of the summer transfer window. Reports out of England suggest Spurs are weighing up a move for the pacey forward as they look to strengthen their squad for a gruelling season ahead.

Spurs manager Antonio Conte has already signed seven players in this window, with six of them already making appearances for the Lilywhites. There have been several departures as well, with Conte looking to keep the right players in the squad as they look to mount a title challenge for the first time in several years. The club have backed the Italian’s vision and have invested significant funds into signing the players that the manager requires.

Their season has started very well indeed as they sit in 4th place with 7 points after three games, just two behind leaders and rivals Arsenal and level on points with Manchester City. Conte will want this momentum to continue and has reiterated that he will still be looking to get in the right players before the transfer window ends.

Their search for suitable players has led them to Leeds United forward Daniel James. The Welshman was brought to the Premier League from the Championship in 2019 when he signed with Man United, and was a regular feature in their starting 11. He scored on his debut for the Red Devils against Chelsea, and since then put in strong shifts every time he played. His pace and energetic displays earned him a reputation as one of the hardest working players in the league, which was praised by then manager Ole Gunnar Solskjaer as well as several of his teammates.

Antonio Conte is said to be looking for a similar type of player, who puts in a lot of efforts whenever given the chance. His versatility in the frontline is yet another quality which suits Conte’s style of play, with James capable of playing on either wing and as a centre-forward, something he has done many times for Leeds United with Patrick Bamford struggling from injuries.

The Welsh forward scored 4 goals in 35 appearances in all competitions last summer, and has made 2 appearances so far this season, most recently starting /in the 3-0 thrashing of Chelsea at Elland Road. His darting runs and speed across the ground to pressure the Chelsea defenders was very crucial to their win, and with Bamford picking up another injury, James could be starting again next weekend.

Any move for Daniel James from the Lilywhites hinges on current winger Bryan Gil’s decision. The 21-year-old winger has fallen down the pecking order and could be on his way out this summer, with Spanish side Valencia touted as the most likely destination. Antonio Conte has suggested to the media that if the Spaniard were to leave, he will most definitely have to be replaced, and was quoted as saying,

“This squad is this and if someone goes away then another has to come. This has to be very clear for everybody. Otherwise, we stay with this squad and we continue our path with these players, this squad. But if someone has to go away, along another must come. This is very clear for me, for the club, but we are totally agreed on this aspect.”

The club remain focused on departures as of now, with Harry Winks and Sergio Reguilon told by Conte that they do not feature in his plans. Along with them Bryan Gil and Japhet Tanganga could also be on their way out, although they are included in the squad for now. Daniel James is said to be content at Leeds as of now, and is happy with the playing time he is getting. At Spurs, his playing time will shrink considerably, with the likes of Harry Kane, Heung-min Son, Richarlison, Dejan Kulusevski and Lucas Moura in the attacking department.

Game time could be a huge obstacle in any potential deal between the two parties, and with the World Cup just around the corner, James will not want to risk his place in the squad by reducing game time. It remains to see if a move for Daniel James materializes this summer, with only 8 days to go till the transfer window shuts down.