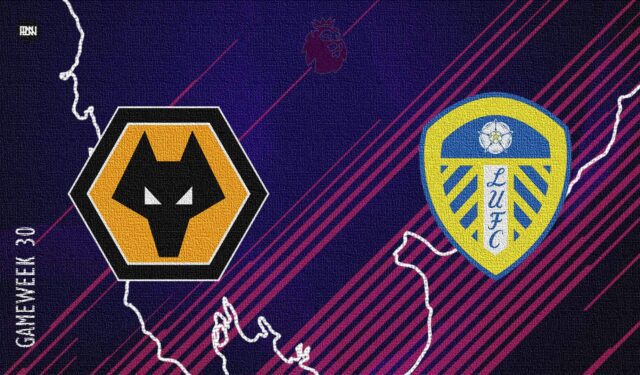 Leeds United will be looking to make it back-to-back wins in the Premier League for the first time this season when they head to the Molineux on Friday evening to take on Wolverhampton Wanderers.

The Whites enter the match off the back of a huge 2-1 victory over Norwich City, while Wolves beat Everton 1-0 last time out to make it successive wins in England’s top flight.

Wolves lost three straight matches to London clubs Arsenal, West Ham United and Crystal Palace between February 24 and March 5, which seriously dented their hopes of a top-four finish, but they have responded impressively with back-to-back victories over Watford and Everton, scoring five times and conceding none.

Last weekend saw Bruno Lage’s men grab a much-needed 1-0 win over league strugglers Everton at Goodison Park, with Conor Coady netting the winning goal early in the second period. The result moved Wolves back into the seventh spot in the table above Tottenham Hotspur.

At the time of writing, Wolves are five points behind fourth-placed Arsenal, but the Gunners have three games in hand, and an extraordinary turn of events would have to occur for Wolves to finish fourth this term, so a top-five or top-six finish seems a more realistic and achievable aim in the final months of the campaign.

The former Championship winners, who finished 13th in the Premier League last season, have struggled for consistency at Molineux this term, winning six, drawing two and losing six of their 14 league matches in front of their own supporters.

Though, they are unbeaten in their last six league games with Leeds, including a 1-0 victory in the corresponding match during the 2020-21 Premier League campaign.

The home side will enter this match full of confidence, but the same could be said for Leeds following their incredibly important 2-1 home success over Norwich on Sunday, which could make for an entertaining clash.

The victory over Dean Smith’s side was the team’s first in the Premier League since the middle of January, and new coach Jesse Marsch will be looking to make it two wins in a row for the first time this season.

A total of 26 points from 29 matches has left the Whites in 16th position in the table, just four points clear of the relegation zone, so they are very much in a battle to remain in the top flight, and it remains to be seen whether the decision to move on from Marcelo Bielsa was the right one. Although, Marsch has certainly improved the intensity and belief in this team in comparison to Bielsa’s final weeks.

Leeds, who will start April with back-to-back games against Southampton and Watford, have struggled on their travels in the league this term, picking up just 10 points from 14 matches, which is the fourth-worst record in the division behind fellow strugglers Everton, Norwich and Burnley.

Bruno Lage will again be without the services of Nelson Semedo and Ki-Jana Hoever for Friday’s contest, while Lage will need to make late checks on Hwang Hee-Chan and Pedro Neto.

As for Leeds United, Liam Cooper, Kalvin Phillips, Leo Hjelde, Tyler Roberts and Junior Firpo are definitely out through injury, while Rodrigo is a doubt due to a thigh problem.

Wolverhampton Wanderers hold one of the league’s best defences with just the 23 goals conceded, fourth behind the league’s current three clubs, a remarkable feat for Bruno Lage and his men as they look to continue their fight for an unprecedented European place in the Portuguese’s first campaign at the helm.

However, they’ve only scored just 29 goals, the lowest in the top half of the table, and the joint-fourth lowest in the whole division, something Lage and his coaching staff will be looking to correct in their remaining nine games. Their goalscoring record at home doesn’t make for promising reading either, with just the 14 goals scored, and they sit 10th in their home form alone with just 20 points from a possible 42 on offer.

If Lage and his men still desire a coveted European place, they will need to gather more wins on their own patch starting on Friday against Leeds United.

The home side are expected to switch back to a 3-4-3 formation for this game, with Daniel Podence and Neto potentially coming into the attack alongside Raul Jimenez. There could also be a change at left-wing back, with Rayan Ait Nouri potentially being introduced for Fernando Marcal, but Joao Moutinho should recapture his spot alongside a resurgent Ruben Neves in midfield, after Leander Dendoncker started against Everton.

For Leeds United, Jesse Marsch will be hoping his side maintain their rapturous energy and intensity from the Norwich game. A 2-1 result possibly flattered Dean Smith’s men, with the home side missing a hatful of chances to make the game more comfortable. 65 goals conceded this campaign is a league high and one of the first task on Jesse Marsch’s to-do list was to improve their defensive work which hasn’t come to fruition fully as yet. Much of that will be down to the pressing from the front approach that Marsch demands, and if Leeds are to have any chance of taking something away at Molineux, they will need to brave both on and off the ball from the first 1st minute as Wolves really do not concede many chances.

Bamford returning to fitness is a welcome boost, as is Raphinha’s return to form under Jesse Marsch. The Brazilian put in a superb showing against Norwich and will be once again key to The Whites’ hopes on Friday.

Wolves’ midfield enforcer Ruben Neves has enjoyed a stunning campaign under Bruno Lage, a man reborn. Four goals so far this season, is his joint-second best return in a Premier League campaign, and he’ll certainly be keen to add to that in the coming weeks. However, his influence both in Wolves’ build-up and in their resolute defending has been a key feature in Lage’s system.

As per Fbref, Neves ranks 6th in the English top-flight this season for passes into the final third (169) and joint-10th for tackles won (41) highlighting his incredible influence both in possession and out of it for Wolves. He remains the man Lage looks to for setting the tempo, building Wolves’ attacks as well as becoming a dominant figure in front of his defence.

Arguably one of the Premier League’s finest footballers, and probably the finest attacker outside the division’s top six clubs. Raphinha is a stunning footballer to feast your eye on, blessed with tremendous dribbling qualities, passing, vision and a remarkable wand that is his left boot.

Nine goals and three assists in the league so far this season, already topping his numbers from last campaign, and has without question been Leeds United’s best player so far this campaign. Jesse Marsch will need his fine fettle as they look to steer clear of the relegation places in the coming games. Raphinha will be central to those plans. He ranks third in the division for key passes (57), fifth progressive passes (140), and fifth for shot-creating actions (102) showing he is indeed one of the league’s most decisive creators.

The Brazilian isn’t a relegation player, his talents are better suited to title-winning teams, and that remains the topic surrounding his immediate future. For now though, with every quality performance, his price tag will only increase with Leeds getting a hefty return and profit from his £17 million move in 2020.