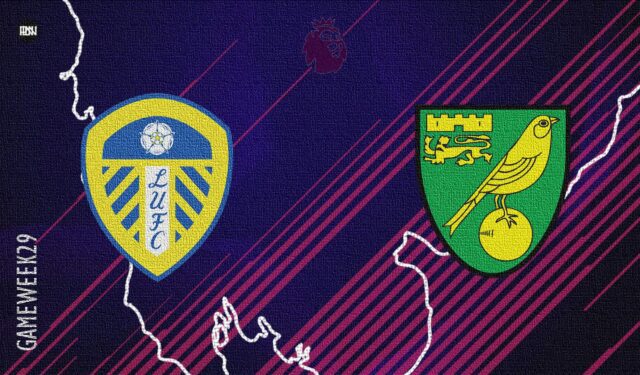 The newest week of Premier League action will put two of the struggling sides in the division up against each other, as Leeds United and Norwich City lock horns on Sunday afternoon. The 16th-placed Leeds who are only two points above Burnley sitting at 18th albeit having played an extra game, while Norwich sit rock bottom of the points table – five points adrift of safety. Three points will be essential for either team in the relegation scrap, with only ten more games to go.

After a fairly decent campaign last season, Leeds United find themselves staring relegation straight in the face this season. The Yorkshire outfit have won only two league games since the turn of the year, and have won only once in their last nine games. In fact, Leeds are winless in their last eight and have lost their last six games – including the last two under the management of Jesse Marsch. The American took over after Marcelo Bielsa was relieved of his duties last month, but Leeds succumbed to back-to-back defeats against Leicester City and Aston Villa.

Leeds have not scored a single goal in their last four league games, while they also boast the unenviable record of having conceded the most goals in the league this season – no other team has conceded more goals than Leeds this season (64). The Whites also have the fourth-worst home record this season having taken just 13 points from 14 home games, and as a result of their disappointing run – they sit 16th on the table with 23 points from 28 games, only two points above Burnley at 18th and a point above 17th-placed Everton, who have played three less games.

As for their opponents, Norwich City are right at the bottom of the points table with a meagre tally of 17 points from their 28 games. The Canaries are five points adrift of Everton placed 17th, but the Toffees have three games in hand – a fact that truly puts the extent of their plight into context. Staying up in the top flight despite the odds will be an exceptionally difficult job to manage for Dean Smith with only ten games left, and their credentials for an unexpected survival faded even further when they succumbed to a 3-1 loss against Chelsea in their previous outing.

The defeat extended their current losing streak to five straight games, and Norwich will go into the outing looking to secure their first win since January. Norwich also have the second-worst away record in the league this season, having picked up only eight points from their 13 games on their travels – but they won on their last travel to Elland Road on 2019, albeit it was in the Championship. Leeds United have the upper hand as per the history of this fixture, as they have won three games compared to Norwich’s two in their last five meetings in all competitions.

Leeds will again be without the services of Liam Cooper, Kalvin Phillips, Leo Hjelde and Tyler Roberts, while Junior Firpo was stretched off with a knee injury in the defeat to Aston Villa on Thursday. Diego Llorente is likely to return to the starting side, with Stuart Dallas potentially moving across to left-back and Luke Ayling shuffling across to the right side of the defence. Patrick Bamford could also come in for a start for Jesse Marsch, and Daniel James could be the player to miss out in attack, with Raphinha, Rodrigo and Jack Harrison set to keep their spots.

As for Norwich, Billy Gilmour is available again after being unable to face his parent club on Thursday, but Adam Idah and Andrew Omobamidele will again miss out through injury. Smith could revert to a four-man defence, which would allow Milot Rashica to come into the attack alongside Teemu Pukki and Joshua Sargent. There are unlikely to be many changes, though, with Max Aarons and Brandon Williams set to feature at full-back, while Pierre Lees-Melou and Christoph Zimmermann could potentially drop out to allow Gilmour and Rashica to start.

While Leeds have conceded the most goals in the league this season with 64 goals, Norwich are right behind them having conceded 61 times – but either team will be looking to turn a new chapter as they look to turn their respective seasons around. Even though Norwich have the worst attacking record in the division with only 17 goals scored all season, they have been in scoring touch of late – having scored in all of their last three games. In contrast, Leeds have not scored in their last four – and will hope to register themselves on the score sheet for the first time since scoring two in a 4-2 loss at Old Trafford. As a result, the game promises to be a meeting between two sides bang out of confidence – but certain to give their all to register three points in order to turn their fortunes around as soon as they can.

The hosts’ main man for this outing is none other than their talisman Raphinha. The Brazilian has been their best performer in an underwhelming season, having racked up nine goals and two assists this season – topping the charts for most goal involvements in the Leeds squad. However, the winger has not been in the best of touch of late with only one goal since the turn of the year – and it is no surprise that Leeds’ sharp drop in form has coincided with their talisman being in a rough patch. However, his ability, as well as his quality, makes him a dangerous prospect for Norwich to deal with – and he will hope to register himself on the score sheet against Norwich for the second time this season after scoring against them in the reverse fixture.

As for the visitors, their key man for this fixture is their talismanic Finnish forward Teemu Pukki. The centre forward is in good form going into this outing having scored two goals in his last two games, taking his tally to eight goals for the league season. Pukki’s importance to this Norwich side can be highlighted by the fact that the Finland international had a direct hand to play in nine out of the Canaries’ total of 17 goals scored this season – Pukki has directly contributed to over half of his team’s total goals scored and is clearly the most important man when it comes to the attacking side of the game for Norwich City. Pukki’s link-up ability with Josh Sargent has been one of the brighter spots of a dull season for Norwich, and he will be important if Norwich are to pile even further on Leeds’ ever-expanding list of current miseries.