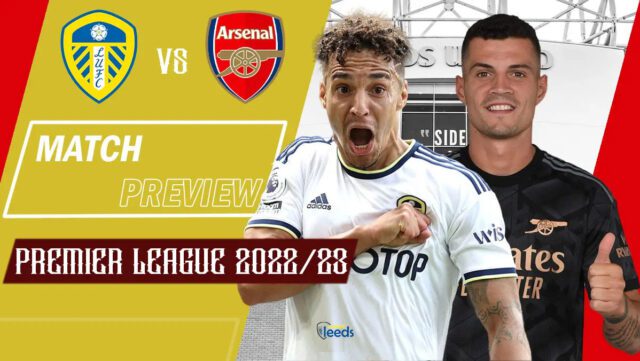 Leeds United host a trailblazing Arsenal side this weekend as the hosts look to register their first victory since August this Sunday. With both teams keen on three points in a bid to further their ambitions, Leeds will be looking to register only their third victory of the campaign whilst the visitors will be keen to avoid a hiccup whilst looking for three points in a bid to extend their lead at the top of the table.

Having taken only two points from their last five league outings, Leeds will be keen on improving their results moving forward. Struggling for consistency on the pitch, manager Jesse Marsch will be looking to avoid another disappointing result this Sunday, with Leeds only two points clear of 18th-placed Southampton heading into the weekend. However, yet to be beaten at Elland Road this season, the Whites will be keen on upsetting the Gunners this weekend.

On the other hand, having lost only one of their last five league outings, Arsenal will be looking to maintain their impressive form moving forward. With the team having been the most consistent side in the league this season, manager Mikel Arteta will be keen on avoiding a hiccup this weekend as the Gunners look to remain at the top of the table before breaking for the World Cup. Boasting an in-form set of players, the Gunners will be rooting for a comfortable three points on Sunday.

Stuart Dallas, Adam Forshaw, Archie Gray, and Leo Hjelde remain out of contention for the weekend while winger Luis Sinisterra is expected to return to the starting lineup having served his three-game suspension. Unlikely to make major changes to the starting lineup, Marsch is likely to continue fielding Patrick Bamford as the central striker with the team hoping to deliver a competitive performance at home on Sunday.

Emile Smith-Rowe and Mohamed Elneny remain out of contention due to injuries whilst left-back Oleksandr Zinchenko’s availability continues to remain doubtful ahead of the weekend. Gabriel Jesus is expected to return to the starting line-up whilst Takehiro Tomiyasu will be pushing for a starting spot at left-back this Sunday.

With both teams in need of three points, Sunday’s clash at Elland Road is likely to produce a compelling encounter on the pitch. Desperate for a morale-boosting victory, Leeds will be keen on causing an upset whilst Arsenal will be looking to avoid enduring a disappointing result on Sunday.

Expected to pressurise the opposition high up the pitch, Leeds will be looking to choke Arsenal’s passing lanes in a bid to recover possession in key areas of the pitch this Sunday. With both pace and creativity across their frontline, the hosts will be looking to capitalise on the break whilst sniffing for opportunities to break past the Gunners’ high defensive line at Elland Road. Although unlikely to dominate possession, Leeds will be keen on winning individual battles on the pitch whilst working on nullifying the opposition’s fluidity in transition alongside carrying out their defensive duties efficiently this Sunday.

Meanwhile, most likely to retain the bulk of possession against Leeds, the visitors will be keen on an early breakthrough at Elland Road. Boasting a number of versatile and creative players within their ranks, Arsenal will be looking to exploit spaces within Leeds’ midfield whilst being wary of giving up possession in vulnerable areas of the pitch on Sunday. Expected to make the best of their set-piece opportunities, the Gunners will be keen on keeping a clean sheet alongside bagging the three points this weekend.

Expected to test Arsenal’s defence owing to his creativity and ability to edge past defenders, Aaronson’s performance is likely to play a vital role in Leeds’ prospects for the game on Sunday. Having registered a goal and an assist in eight league games, the USA international will be keen on delivering a notable performance in a bid to improve the home team’s prospects at Elland Road.

Pivotal to Arsenal’s impressive performances this season, Ødegaard is likely to play a key role in the team’s prospects on Sunday. Likely to be utilised in a creative role requiring him to create space for his teammates whilst occupying opposition defenders, the midfielder will be keen on maintaining his excellent form in a bid to help the team extend their lead at the top of the table moving forward.