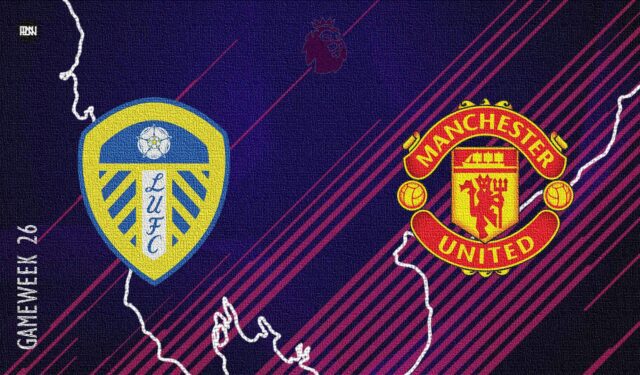 Matchday 26 of 38 brings us another great fixture, with an age-old rivalry set to reignite. Manchester United face bitter rivals Leeds United as the Red Devils make the trip to West Yorkshire to take on the Whites. Leeds United and Man United have always had a fierce rivalry, a rivalry that dates back to the 15th Century when the War of Roses was fought between the House of Lancaster and the House of York. Ever since then, there has been a rivalry that has been carried out till date and has seen some truly memorable clashes between the two clubs. There is genuine bitterness among hardcore fans of both sides, and the hostilities are set to heat up again with both sides going head-to-head at a ground with one of the most ferocious and vociferous atmospheres in English football.

Leeds United were very poor at the start of the season, losing the opening game against Man United 5-1 at Old Trafford. That result was followed by a string of draws and losses, and they would not have their first win in the league until early October. A total of 10 losses so far this season, has left the Peacocks in 15th place in the league table, just 6 points clear of the relegation zone. Their form seemed to have picked up of late with two consecutive wins in the league in January, which was followed by a thrilling 3-3 draw against Aston Villa, which saw them come back from 2 goals down. However, losses to Newcastle United and Everton have disrupted their flow, and it is the same story yet again, with inconsistent displays and injuries hurting the Yorkshire-based club. Now they turn their attention to a very tough game on Sunday. They face a familiar foe in Manchester United, a team against whom they have not had the best of results of late. Leeds have not won against the Mancunians in their last 6 games in the league. Leeds have an abysmal record of just 4 wins in 27 games against their rivals, losing 15. However, it is a game that everyone looks forward to, and the atmosphere inside Elland Road will be fantastic, and the fans will hope that their presence is enough to give the Whites a push for a decent result at home.

Manchester United were last in action against Brighton and Hove Albion, as they won 2-0 at home, thanks to goals from the Portuguese duo of Cristiano Ronaldo and Bruno Fernandes. The Seagulls were largely the better team, but they did not trouble the United defence too much, mustering only 3 shots on target. However, United were given plenty of opportunities to put the game to bed and were rewarded with three very valuable points to take them back into the top 4 and within 4 points of 3rd placed Chelsea. They now travel to Elland Road, with a very important UCL Round of 16 tie against Atletico Madrid coming up, with the first leg set to be played out on Wednesday night in Spain. They will be confident of getting past a team they have dealt with easily on past occasions and will hope to secure a win here, which will in turn boost their spirits of taking on Atletico. The UCL remains the only chance the Red Devils have of securing some silverware, and they will look to focus all their energy on it, and we could see some squad rotation on Sunday at Elland Road.

Leeds United will be without main striker Patrick Bamford, defensive midfielder Kalvin Phillips and defender Liam Cooper, as their injury woes continue. However, Marcelo Bielsa’s side could be boosted by the return of full-back Junior Firpo, who will be looking to start. There is still doubts over the fitness of Stuart Dallas, with Bielsa refusing to rule him out of the tie just yet. Youngster Sam Greenwood will also miss out against Man United.

Man United manager Ralf Rangnick confirmed on Friday the unavailability of Uruguayan striker Edinson Cavani, with the veteran continuing his recovery from a groin injury. Raphael Varane is fit again after pulling out of the lineup against Brighton and Hove Albion with an illness and is in contention to start at Elland Road. There is more good news for the Red Devils, with midfielder Nemanja Matic back fit and available, along with center-back Eric Bailly, who was also passed fit by Rangnick. Both players could play with squad rotation in mind. Goalkeeper Tom Heaton has picked up an injury in training and is set to miss out on the trip to Leeds.

It is the very first time since 2003 that the Red Devils play against Leeds at Elland Road in front of fans, with last season’s 0-0 draw played behind closed doors. Man United will be well aware of the hostile environment that they are in for at Elland Road, with the Leeds fans bound to be vocal and heated against their bitter rivals. Both sides are desperate to win, with Leeds looking for three points that will keep them away from the relegation zone, while the Mancunians looking to keep their unbeaten run going in a bid to further stake their claim on the 4th spot.

It is a game that has provided goals in recent times, with fans witnessing scorelines of 5-1 and 6-2. With Leeds’ injury concerns and a very leaky defence, it will act as a stimulus for the Red Devils to get a few goals, especially with Man United boosted by the midweek win and cleansheet over Brighton and Hove Albion, who have one of the best defences in the league. Leeds have conceded 46 times in their 23 Premier League matches this season and shipped three in a 3-0 defeat to Everton at Goodison Park last time out, which the 13-time PL winners will look to capitalize on.

It is also a game that will see two master tacticians Marcelo Bielsa and Ralf Rangnick go head-to-head for the first time. Both have made a name for themselves as football innovators, with their tactical setups and philosophies shaping a generation of new coaches. It will be a very interesting watch to see how the two set their teams up on Sunday. While Rangnick has a much better squad at his disposal, Bielsa is very capable of outwitting him and springing a surprise on the star-studded cast of United. The fierce rivalry between the two teams, their respective style of play and the current scenarios surrounding the clubs all build-up to what will definitely be a very interesting watch on Sunday.

The former Manchester United winger enjoyed a decent two years at Old Trafford, making 74 appearances for the Red Devils. However, he was sold to Leeds United- previously coming very close to making the move before signing for Man United- in the summer of 2021, with the arrival of Cristiano Ronaldo and Jadon Sancho meaning there was no place for the pacey Welshman in the team. The 24-year-old forward has made 19 appearances so far in the league for Leeds, scoring 4 times and assisting twice. With a plethora of injuries to key attackers in the squad, James has had to play various positions this season, and has started as a striker in the last 4 games. Marcelo Bielsa has relied upon the Welsh forward a lot this season, and he is a crucial player in his setup. He will hope to prove his critics wrong with a strong performance against his former team.

Back among the goals with a well-taken run and finish against Brighton in the midweek, Bruno Fernandes took his tally to 8 goals in the league this season. With Jadon Sancho looking comfortable, and with the return of Paul Pogba to the squad, Fernandes will have someone to share the burden of attacking responsibilities now. He has already hurt Leeds United this season, scoring a hattrick against them in the very first game of the new season. His linked up very well with Pogba on that day, with the Frenchman getting 4 assists in the game that ended 5-1 to the Red Devils. He will look to put in a similar performance against them again on Sunday, and hurt a severely weakened team.