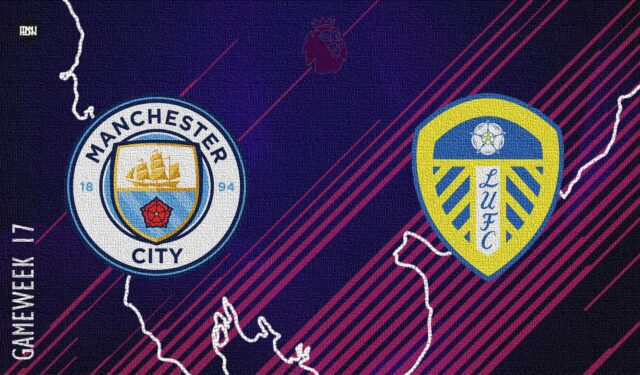 Manchester City are preparing to face an injury-hit Leeds United side who will be looking for only their 4th win this season. Pep Guardiola’s men have won six league games on the bounce and lead the Premier League by one point. Last time out, they needed a penalty against a 10 men Wolves side. The blue side from Manchester will have to utilize their impressive squad depth in this difficult December period.

In contrast, Leeds United haven’t had the best of starts to this campaign. They are languishing in 15th place and the fixtures do not look kind. They were hit by constant injuries throughout the season which has forced Bielsa to rotate heavily almost every game. A win at the Etihad seems like a tough task but Leeds will take heart from the fact they defeated City at this stadium last time out. Stuart Dallas’ injury-time winner will bring back fond memories to the Leeds fans and they’ll hope the team can repeat it.

Manchester City will be without Joao Cancelo as the defender picked up his 5th yellow card of the season against Wolves and is serving a one-match ban. Ferran Torres is a long term absentee and is expected to be back during the New Year period. Pep Guardiola mentioned in the post-match interview that Ilkay Gundogan is struggling “a lot” with back problems, but has confirmed that the German is in contention against Leeds. Phil Foden and Nathan Ake also had injury troubles against Leipzig but they made the bench against Wolves and the former is expected to start this game. Kyle Walker is also expected to take the place of Cancelo and Zinchenko should continue at left-back.

Leeds United have host of injury problems. Partick Bamford who made his return against Brentford has suffered an injury setback again and will miss this game. Kalvin Phillps and Liam Cooper are also out with hamstring while Rodrigo is also sidelined with heel pain. Robin Koch also dealing with illness, and Pascal Struijk is out with a knee trouble. Bielsa will hope Raphinha can inspire again to achieve anything other than a defeat against City.

Embed from Getty Images Manchester City have been nothing short of incredible since their defeat against Crystal Palace. They have won their last six games and will look to continue their winning run. Pep Guardiola and his side only achieved 1 point against Leeds United last season. City will look to control the game with the likes of Bernardo Silva and Ilkay Gundogan in the middle of the park. The approach will be the same and Pep will rely on the likes of Foden and Sterling to continue their good form. Wolves gave been a challenge last time out and they had to rely on a controversial penalty decision to win the game 1-0. The performance was far from convincing and Pep will expect a better one this time out.

Marcelo Bielsa has relied heavily on Raphinha in attack and will hope that the Brazilian can inspire Leeds again. They have been hard hit with injuries to Bamford, Phillps and Llorente. Their performance against Chelsea showed that they can trouble teams and were unlucky to not get a draw against the European Champions. Bielsa’s team have certainly improved in the last month and will hope that their side can get a result on Tuesday.

The England international has regained his form over the last month and seems to be hitting top levels again. He has scored 3 goals in the last 4 games and his perfromances have gradually improved. Leeds’ man to man marking system means Sterling will get a lot of space to attack and will hope to capitalise on the space he is given. He looked the sharpest of the lot against Wolves, creating 4 chances and scoring the penalty which was his 100th Premier League goal. Pep was full of praise for Sterling in the press conference on how he has returned to form. In form, Raheem Sterling is a threat to any opposition and Leeds will find it diffcult to deal with him.

The Brazilian has been Marcelo Bielsa’s trump card throughout the season. He has scored 7 league goals out of the 17 Leeds have scored. Raphinha will look to target Zinchenko and will look to come out on top against him. Bielsa will hope Raphinha can provide the goods again for Leeds fans to have any hope of getting a result at the Etihad. With the likes of Bamford and Phillps out, the Leeds players look at Raphinha to provide the attacking returns and will hope he can be a creative outlet and a goal threat against City.