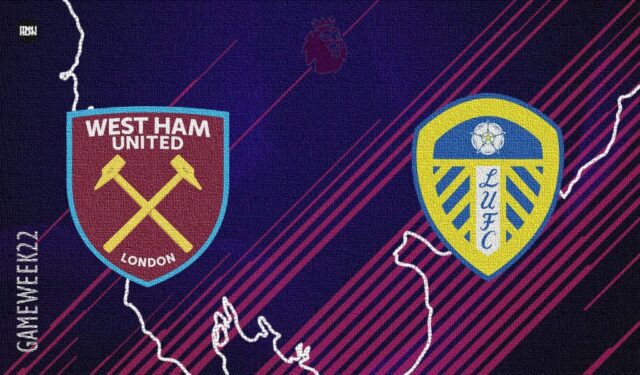 The Cup fever that was at its peak last week has now evaporated with teams back in Premier League action. Gameweek 22 is upon us & it promises to be an exciting one, to say the least! From a mammoth fixture at the Etihad where Manchester City face Chelsea in a top of the table showdown to the relegation 6 pointer between Newcastle & Watford, the gameweek is filled with exciting matchups at both ends of the table. The fixture in focus for today turns our attention to the London Stadium where the Hammers take on Bielsa’s Leeds United. West Ham are flying high in the league & David Moyes seems to have finally turned the club’s fortunes upside down. On the other hand, Leeds are lingering in the bottom half of the table with the pressure rising on Marcelo Bielsa & his men.

West Ham defeated the league’s bottom side Norwich City in their previous fixture that propelled the Hammers into the Top 4. Having already reached the Europa League round of 32, David Moyes’ bandwagon is riding in full swing. In contrast to all the merriment in East London, a cloud of gloom has cast its shadow over Elland Road. After a successful campaign upon returning to the top flight last season, Marcelo Bielsa has struggled to replicate past season’s performances with an injury-ravaged squad. Covid outbreaks & injuries to key players has left the high flyers of Leeds lingering in 16th, locked in a relegation scrap. Let us look at how the teams stack up against each other & what we can possibly expect from this matchup.

West Ham have managed to avoid losing their major players to Covid or injuries & it has certainly helped them in their quest for European football. The Hammers will be without the services of Said Benrahma who has departed to participate in the African Cup of Nations. Tomas Soucek missed the last league game against Norwich after testing positive for Covid but it seems that the Czech midfield general will be available for selection. Apart from this, notable absentees in the Hammers squad include the likes of Kurt Zouma, Fredericks & Ogbonna who continue to recover from major injuries.

Leeds are a side who have suffered numerous injuries to key players that has derailed their season. Marcelo Bielsa will again have to deal with the unavailability of key players as he prepares to face the mammoth task of going to the London Stadium & stealing points off the Hammers. Leeds will be without Liam Cooper, Kalvin Phillips, Tyler Roberts, Joe Gelhardt, Jamie Shackleton and Charlie Cresswell as they continue their recovery. However in some rare positive news, Bielsa is hoping that his talisman Patrick Bamford along with Rodrigo Moreno will be available for selection after a spell on the sidelines.

West Ham comes into this matchup in fine form having won their previous 3 premier league outings. David Moyes will undoubtedly set up his side to play on the front foot & add to the wave of elation that has engulfed the Hammers faithful. With Soucek expected to come straight into the side, Manuel Lanzini might be pushed up the pitch after starring in the midfield pivot against Norwich. With Leeds expected to play their usual brand of attacking, pressing & flamboyant football, the Hammers midfield will surely have their work cut off. West Ham will be forced to play through Leeds’ intense press but they will most probably be able to exploit the vast spaces left between the lines, especially on the counter-attack.

Leeds on the other hand have shown no signs of changing their expansive approach even after their poor run of form. Bielsa will order his troops to keep the ball & constantly progress it forwards as soon as possible. The midfielders, especially Klich and Foreshaw or Koch will be tasked with breaking the defensive lines & providing balls for the likes of James & Harrison to run onto. If Bamford returns to the starting lineup, then Leeds will finally have a target man in front of the goal & his tenacity in the 18-yard box can be used to good effect. Bamford’s indispensable build-up pay will potentially play a pivotal role in this must-win fixture for Bielsa’s men.

The England International has cemented his position in the Hammers setup as a deep-lying, box to box midfielder who can carry the ball forwards & also provide defensive cover for his team. Rice perfectly fits the profile of a David Moyes team which has propelled him to be the captain of his team at such a young age. His leadership & ability to galvanise the squad will be needed to resist the Leeds pressing onslaught. Rice will be tasked with breaking the opposition press & making surging runs up the pitch to join the Front Four in the attack. His defensive abilities will surely be tested with Leeds’ intricate short-passing maneuvers & he will have his work cut out while trying to follow the Leeds midfielders making late runs into the box. But with a player of his ability, Moyes will be expecting his club captain to take the game by the scruff of its neck.

In a huge sigh of relief, Leeds are expected to welcome back Patrick Bamford into their squad after he successfully recovered from his injury. More often than not, Leeds have missed a target man upfront who can slot away the chances created by the forward players. Although Tyler Roberts managed to do a decent job in Bamford’s absence, it’s clear that Bamford is an indispensable figure in Bielsa’s squad. With him back, players such as Dan James, Harrison & Klich will be tasked with providing service for the English forward who will be hungry to make an instant impact upon returning to the starting lineup. If he’s at his best then Bielsa & his boys can certainly pull off a major upset in East London.